There was never anything like him back then and none like him ever since for Argentina. He truly made the No.9 shirt his own for doing nothing but….

As part of its centenary celebration, CONMEBOL (the South American football Confederation) has decided to honour Gabriel BATISTUTA by giving him a replica of the Copa America trophy.

CONMEBOL’s President Alejandro DOMINGUEZ said that:
“We believe that this is a recognition that for the trajectory of a player and a person who is part of the history of South American football”.

“Undoubtedly this is a great surprise, I’ve always wanted the replica of a trophy that means a lot for my career, for my teammates and for my country. I’m excited and grateful to CONMEBOL for this tribute”.

Batigol as he is known to his adoring fans, has won the tournament twice in his career. The first came in 1991 in Chile where he also finished as the tournament’s top scorer with 6 goals. He won it again two years later in Ecuador, scoring twice in the final (which turned out be Argentina’s last major trophy). 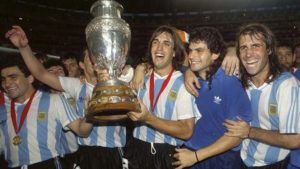