Argentina’s list has been announced and it’s a good one!

Two players who have been in great form lately, Leandro PAREDES and Papu GOMEZ also make the list.

These are all the players that reside outside of Argentina. Locally based players will be called up later. 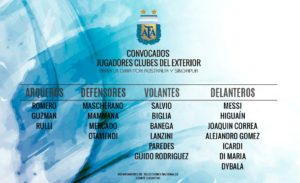 What does everything think?? What local based players would you like to see called up? The rumored players to be called up in the following days are: Ignacio Fernández, Jonatan Maidana and Lucas Alario, of River Plate, Nicolás Tagliafico, of Independiente, and Javier Pinola, of Rosario Central.  We’re finally getting some must needed changes.  There’s more to come.  We’ll have all your updates as they come in!

Coach Mauricio Pochettino extends his contract with PSG until June 2023

Ángel Di María, from almost ending his cycle with Argentina to scoring the Copa America winner