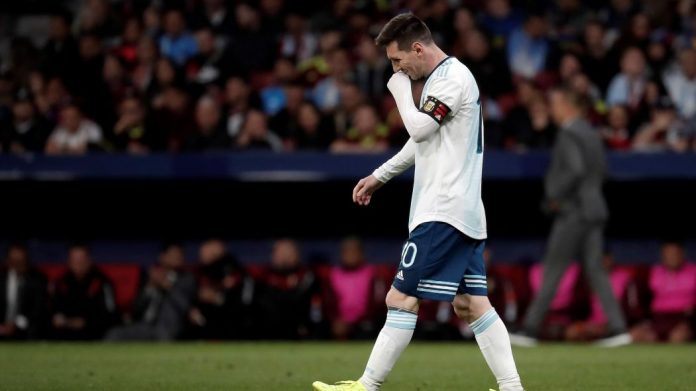 Lionel MESSI gave a lengthy interview with 947 FM Radio in Argentina where he discusses several topics.

“This generation was mistreated. We don’t sell smoke. We are professionals and we want (to win). I want to win something with the Argentina national team. I will play in all the important things. A lot of people told me I won’t come back, family, friends… My son asked me “Why do they kill you in Argentina?”

“Realistically, there’s a lot of work to be done to be a power house. These kids have had very little matches with the Argentina team. You have to be patient and I have no doubt that we will be strong.”

About the new players in the Argentina team:

“The kids have to jump up and play with the Argentina national team, not with me. They are there for what they do every weeekend.

“I have a great relationship with all of them. I’m the new one and I have to adapt to them.

In regards to the best players in the world and Cristiano RONALDO:

“Today, NEYMAR, MBAPPE, SUAREZ, AGUERO. Today, they can be the best in the world. Cristiano, I take him out and put him with me, a part, ha. I swear to you, I am being honest.

“I miss Cristiano in Spain. It was nice to have him although it was difficult to see him lift titles. It would have been nice to still have him here.

“I have a lot of respect for Juventus. They are a great team and even mroe with Cristiano. Hopefully, we get to the final and after that, what happens, happens.”

About the support from fans and the media:

“I know that the majority support me. Every time I would go to Argentina, they would show me a lot of support. I know that it’s the minority who look for crap. I know that clearly.

“I generally change the two shirts I have in every match.

“Let them say what they want to say, let them talk, I have to play and that’s what I do.

On the missed chances in the final:

“Do you know the amount of times I’ve replayed the final and the chances we had? It would have been so different if we would have put some of them in.”

About missing Argentina’s match against Morocco:

“It became customary for people to say things about me, inventing… The truth is that I’ve had pain in my pubic area from before the December break and I would train a little, not play all of the matches.”

About playing a 5 man back line against Venezuela:

“It surprised me because the first few days, we had trained in a different way, but it’s the time to try things out. He (the coach) reached his own conclusions.”

About playing with Newell’s Old Boys:

“I’d like to play at Newell’s but it’s not easy going back to Argentina. I have to think of my family and the kids. It depends on them too.

“I’m from River? There,s nothing to see. I’m from Newell’s ever since I was a kid. I don’t know why they say that.”

On his relationship with Claudio TAPIA:

“With TAPIA (AFA president), I have a very good relationship from the first moment.”

“Barcelona’s philosophy is their whole history. The Argentina national team does not have the players to play that way nor the time to train.”

“I’ve had a lot of monsters (great players) play alongside me but with SUAREZ there’s a friendship off the pitch.”

“It was difficult to talk about the World Cup. There were many things that went wrong from the beginning. Not being able to win the first match, missing the penalty. The second match started out very even but after the first goal, things went south. We got disorganized. We qualified in the last match and then in the France match, it was 2-2 and they scored and we weren’t able to get it back together and then we had to start from behind. The World Cup started out badly. Qualifiers were difficult. It was all difficult.

“After the World Cup, I didn’t feel like talking. I wanted to be locked up and suffer on my own with my family. I wanted to get away from everything. Get away from the national team and look at things coldly. We’ve been mistreated for over a decade despite our achievements. This is despite not winning any trophies. We played three finals and to end this cycle this way.

“This generation had to deal with things that no other Argentina team had to deal with. So for people to say such crazy things and so many lies with a straight face, to be honest, I never saw that before. This group got to do great things. We played in a World Cup final… We played in two Copa America finals. It’s not easy to get to that point. The media is a mess. That’s why we brushed them aside and didn’t want to speak to them because if we didn’t take care of ourselves and strengthen one another, they’d keep attacking us.”

In regards to the friends club:

“The Club of Friends is something that I’ve heard for years. I was supposedly the one that made up the lineups, brought in the coaches and I virtually ran AFA. The Club of Friends happened to be the best at their clubs. It gets me upset to hear it.

“We did get together with Sampaoli because there were desperate times. If we did not and were eliminated in the first round, it would have been one of the greatest failures ever. We got together with Jorge SAMPAOLI like great teams do. That was it. It was normal.

“They also said my father had power within AFA. It’s just crazy. My family suffers. I have friends, family in Argentina that suffer because of all the things that the media say. Anyone says anything and people don’t question it. They actually believe it.

“Then I become the motherfucker while my dad runs AFA. It’s just crazy.

“We got to a point were just stopped caring about what people said. Maybe we should have come out sooner. But if we did, we’d be coming out every day to clarify. Every day something new came out. Every day people lied. Maybe we were wrong in not coming out.”