With the season already started in several countries and about to start in Germany, England, Spain and Italy, there are still a lot of Argentine footballers, who represented their country at the last World Cup, struggling to secure a place in the starting lineup at club level.

Different reasons. Various clubs. Unique situations. But there is one thing in common: they don’t know if they will play regularely this season and so their future as international footballers look not so bright anymore.

Let´s take a look at some of them:

Javier SAVIOLA: The ‘Little Rabbitt’ is still uncertain about his next moves. After a great 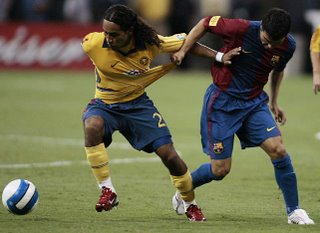 World Cup and a summer of endless rumours and ‘interested clubs’ (PSV, Bolton, Newcastle, Arsenal, Panathinaikos, Sevilla, Mallorca, Villarreal and so on) he joined FC Barcelona’s pre-season tour of Mexico and USA and the latest news is that he scored in the last friendly against America (4-4 draw). If he stays, he will face a hard competition for places in a very crowded Blaugrana attack but at the moment he is presenting his credentials. Will Rijkaard use him? Will he stay despite not featuring in the starting 11? Will some of those clubs finally put the money where their mouth is and take him for good?

Roberto AYALA: Crisis. His excellent World Cup performances are a distant memory now. At least for people in Valencia. They are accussing him of ‘money-seeker’ (like no other footballer, right?) and he was rumoured to be leaving for Villarreal. The Valencia board is not happy with him wanting to leave and yesterday one of the possibilities for AYALA was to sit down for a whole season waiting for his contract to run out and then leave the club with his fate in his own hands. But he re-joined Valencia for their training camp and there are question marks all over the place. It’ll be hard to keep AYALA at Valencia with clubs the like of Torino (newly promoted to Serie A) and Tottenham Hotspurs desperately wanting to sign him up for this season.

Juan Pablo SORIN: Sam ALLARDYCE wanted the Argentina skipper to join his Bolton side for the season. They got in contact with Villarreal and both clubs agreed a fee for ‘Juampi’. The Yellow Submarine have signed Robert PIRES and the Frenchman will play in SORIN’s position. So the Argentine went to Bolton to talk with ALLARDYCE and they failed to agree on a weekly fee. Bolton offered 25.000 British pounds per week, SORIN wanted 35.000.
Bottomline? He is back at Villarreal and now faces a difficult destiny being relegated to a back-up role. Will he be happy? Will another club come after him after all the money he is asking?

Lionel SCALONI: Virtually at war against Deportivo La Coruña’s board and manager. He said this week: ‘If the manager doesn’t want me, that’s fine by me. But they have to pay me up to the last penny they owe me’. SCALONI played 6 month on loan at West Ham but when he was to re-join Deportivo, the manager Joaquín CAPARROS decided he doesn’t want him. Now it remains to be seen what will happen to him.

All these cases led me to a question I can’t answer: Just how important is for a player to perform at a high level in a World Cup?

In SAVIOLA and AYALA’s cases, it doesn’t seem to be crucial. They played at a very high level, even scoring important goals, but they are still struggling to find a spot in a European club.

SORIN had a decent World Cup but he didn’t shine. He is, however, a great option. A player with experience in many leagues and with a lot to give. He can play in defense and midfield and he can also have a presence in both areas.

SCALONI is a different kind of animal. I’m not surprise he is not taken into consideration by many big clubs, but still, he should find a job somewhere.

It’s sad to see these things happening as I think it affects the general status of Argentine football and in consequence, our national team. I don’t see the same with players from the Brazilian, Italian, French or German national teams.

On the other hand we’ve got high-profile players and new arrivals to Europe and they provide us with a good balance and hopes for a bright future. Will we have 22 or 23 of them in four years time?