ARGENTINA TO FACE CHINA AND JAPAN

After Alfio BASILE’s debut friendly match against Brazil in Arsenal’s Emirates Stadium in London (Sept. 3rd) there is more information regarding the future friendlies for the remainder of this year. And it is with great enthusiasm that I have to let you know that Argentina will be playing a friendly match against both, China and Japan! Argentina will visit Asia and will play on October 7th and 11th. Venues and other details are yet to be confirmed.

It is known that BASILE has a lot of favourite players still competing in our local league (Fernando GAGO, Sebastián BATTAGLIA, Hugo IBARRA and Rodrigo PALACIO to name a few), but for the friendly against Brazil in London, he will call up a team formed exclusively by footballers playing outside Argentina, mostly in Europe, of course. There is another little thing to that, BASILE will not only pay attention to La Liga and Serie A. He’ll concentrate in other leagues because he wants to have players with a little bit more activity. Of course there’ll be exceptions to this and I hope to see MESSI and AGÜERO, to name just two. With this scenario, the names dancing in COCO’s head are:

And finally the Corinthians duo Carlos TEVEZ and Javier MASCHERANO.

These look like certainties, but nothing is confirmed yet. We’ll have to wait and see. And of course, due to the contract signed by AFA with the Russian company (RENOVA), BASILE will have to call up 8 players from the World Cup squad plus: Germán LUX, Gonzalo RODRIGUEZ, Leandro SOMOZA, Hernan PELLERANO, Fernando GAGO, Federico INSUA and Fernando BELLUSCHI. 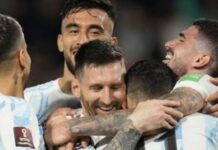 Argentina set to play Israel in June in Europe