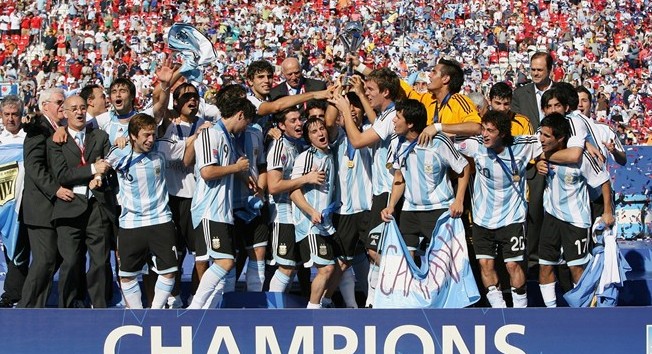 It has already been 10 years since the 2007 squad presented the last U-20 world champion trophy for the Albiceleste. Some of them had become main players for Argentina’s senior national team in recent years, such as Angel DI MARIA, Sergio AGUERO, Sergio ROMERO, Ever BANEGA and Gabriel MERCADO. Some still play in the top European leagues, but there are also some who had not too brilliant career like their other compatriots. Then where are they now? We summarizes some below

MATIAS CAHAIS: The team captain of 2007 (not played in the final because of yellow card accumulation), Boca Juniors academy defender had turned down an offer of Spanish giants Real Madrid. He had a short career in Europe, in the Netherlands with FC Groningen, then returned to Argentina and played a season long with Racing Club before in 2014 tried again to continue his career out of Argentina in Chile, Colombia and now in Liga MX Mexico with Veracruz.

MAXI MORALEZ: Performing impressively in the FIFA U-20 WC 2007 as the third top scorer (bronze shoe) and 2nd best player (silver ball) behind Sergio Aguero, this attacking midfielder started his European career in Russia with FC Moscow but only survived several months and returned to Argentina. The second time he tried his luck in Europe, he arrived in the Italian Serie A and became the main pillar with Atalanta for 4 seasons before in 2016 he moved to Club Leon Mexico. In the beginning 2017, he signed MLS club, New York City FC, playing with David VILLA and Andrea PIRLO.

FEDE FAZIO: The core pillar of the 2007 team and a year later in the Beijing Olympic squad. FAZIO had a bright career in Spain with Sevilla. He failed to shine at Tottenham Hotspur in recent years, now Fazio consistently keeps the back line of AS Roma. He only has 3 caps in senior national team, all in friendly matches, last called up at the beginning of coaching Tata MARTINO.

PABLO PIATTI: He had a fairly impressive career in Spain with Almeria, Valencia and now in Espanyol. The winger left-footed player who can also act as an attacker is actually enough to have the quality for the senior national team but the necessity to compete with Argentina other top winger and attackers makes the opportunity for him almost difficult. Until now he only has 1 cap in the senior national team, it happened during Sergio Batista-era in a friendly match against Poland in 2011.

EMILIANO INSUA: He hoped to have a glorious career in Europe when recruited by Liverpool, this left-back then lost his place there and the Reds loaned him to Galatasaray in 2010. When in Portugal with Sporting Lisbon, Insua caught the attention of Simeone who invited him to join Atletico Madrid in 2013 but he failed to compete with Filipe LUIS. He was also loaned to Rayo Vallecano for the 2014-15 season. INSUA now looks to have settled comfortably in Germany with Vfb Stuttgart despite the club being relegated from the Bundesliga last season.

MAURO ZARATE: The decisive goal scorer in the 2007 final has an up-and-down career in Europe plus injury problems that often affected his performance. ZARATE also has several attitude problems that has overshadowed his talents. Like PIATTI, the competition with top names on the front lines has made it difficult for ZARATE to get an opportunity to play with the Albiceleste senior side until now. He was ever offered the chance to play for Chile (the birth country of his father) and Italy (from his mother’s family) but ZARATE refused both. He revealed that he always had a dream to wear the uniform of Argentina, not another country. Now playing for Watford FC in England and is currently suffering a long term injury.

PAPU GOMEZ: An Arsenal de Sarandi academy product that has a good performance in Serie A even though he gained it with the small club like Catania and now Atalanta. He can respond with the various roles that are given in the line of attack. In recent years, based on his impressive performance at Atalanta, he was even almost called up by the Italian national team but failed because of FIFA’s intervention. After BAUZA got the sacked from the national team, GOMEZ is now rumored to have a great opportunity to get a call from the new national team coach.

LAUTARO ACOSTA: The champion of FIFA U-20 2007 and 2008 Olympic gold medalist had attracted the attention of Sevilla who recruited him with a long term contract but a terrible injury in his debut season made his career in Spain frustrated and he was then lent to Racing Santander. In 2012 the agile winger went back to Argentina to join Boca Juniors and then a year later he joined Lanus, his boyhood club who help developed him. He was as part of the club’s 2013 Copa Sudamericana campaign which they eventually became champions. He was also become an important pillar when Lanus won the Argentine Primera Division last year, which made him got the call up for the senior team by Tata MARTINO and was named in the preliminary squad for the Copa America Centenario 2016 but failed to make into in the final team.

ALEJANDRO ARIEL CABRAL: Had a long domestic career with Velez, then moved to Europe to play for Legia Warsaw in Poland, on loan for a season between his career with Velez. After 8 years with Velez, in 2015 this central midfielder since went to Brazil to play with Cruzeiro until now.

LEONARDO SIGALI: This highly rated center-back had joined Villarreal in 2007 but did not even play and was twice loaned back to Argentina with Lanus and Godoy Cruz, the latter went on to sign him on a permanent deal in 2010. In the last few years he was comfortable playing for the Croatian champion, Dinamo Zagreb. 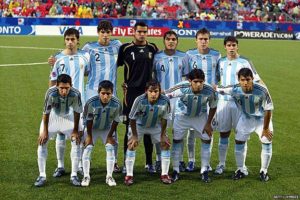 A big thanks to our friend Fran HY from Indonesia (a country that has a amazing following for the Albiceleste and also great football culture, the best in South East Asia!). He also happens to be the main admin of Albiceleste Indonesia, a dedicated Facebook group sharing all the latest news on Argentine football in the Indonesian language and also to Rio Mahendra for helping to do the English translation.