Jorge SAMPAOLI has revealed a new list for the November friendlies with Diego PEROTTI included in the squad.

We know Argentina will play Russia but we don’t know who they will face in their second friendly of the same month. Here is the list down below. Notable omissions: Manuel LANZINI and Enzo PEREZ. Anyone else? Looks like HIGUAIN has been left out again. Two new faces: Matias KRANEVITTER and Diego PEROTTI. What does everyone think? 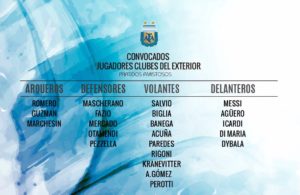 If any of these players are not able to make it, there are eight players who Jorge SAMPAOLI has as backups: Joaquín Correa, Angel Correa, Guido Pizarro, Emanuel Mammana, Giovanni Lo Celso, Manuel Lanzini, Gerónimo Rulli & Emanuel Insua.  He also revealed that he is closely monitoring the recoveries of both Ramiro FUNES MORI and Marcos ROJO.

In terms of the local based players: Darío Benedetto (Boca), Enzo Pérez & Nacho Fernández (River) would be the local players that are picked. Also, there will be a fourth player that gets picked and that would come from either:  Fabricio Bustos (Independiente), Pablo Pérez (Boca) or Lautaro Acosta (Lanús).