The “Rey de Copas” or the “King of Cups” deservedly won 3-2 last night on aggregate. It was their second Copa Sudamericana title.

Trailing 2-1 from the first leg in Argentina last week and with support from more than 54,000 fans in an overflowing Maracana, Flamengo striker Lucas Paqueta opened the scoring in the 29th minute from a low cross by defender Rever. Just minutes later, a disputed penalty allowed midfielder Ezequiel BARCO to equalize.

Colombian referee Wilmar Roldan issued seven yellow cards, four of them to Independiente players, all in the last 17 minutes of regulation time. Flamengo have had to play without striker Paolo Guerrero, who has been suspended by FIFA after failing an anti-doping test.

Independiente midfielder Ezequiel BARCO said the Copa Sudamericana opens a new era for the club. They are the biggest winner of the Copa Libertadores with seven titles, but the last one was in distant 1984. No side has lifted the Sudamericana on more occasions than Independiente, though Boca Juniors have also triumphed twice, while the Avellaneda (of Buenos Aires) based club’s seven Copa Libertadores titles are unparalleled.

On their way to the title, the Sudamericana champions eliminated Argentina’s Atletico Tucuman and Paraguay’s Nacional and Libertad until they met Flamengo in the final.

Barco, one of the best players of the tournament, is leaving the club to play in MLS for Atlanta. He is likely to have played his last match for Independiente at the Maracana.

“I never imagined I could leave Independiente, but now all I want to do is to celebrate this title and thank fans for their support all those years.” 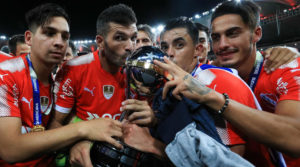