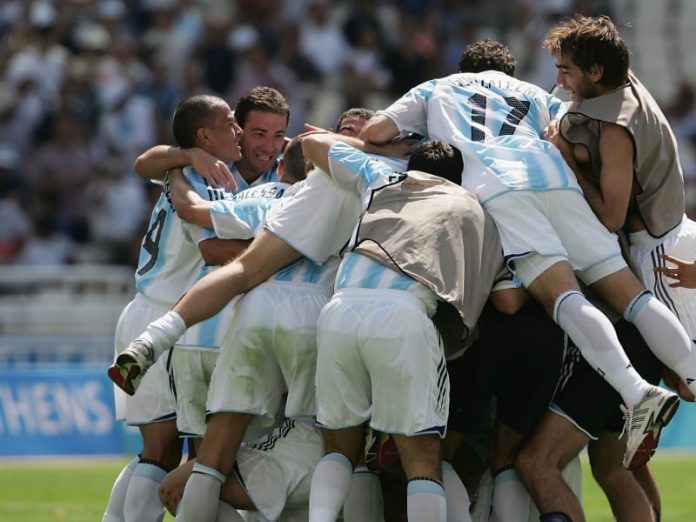 On this day in 2004, Marcelo BIELSA’s Argentina team won gold at the Athens Summer Olympic Games, winning the final 1-0 vs. Paraguay.

It was a star studded Argentina team which was sent out by coach BIELSA. Star man Carlos TEVEZ scored 8 goals in the tournament on the road to the final. Argentina’s squad consisted of the following players:

All of the 19 players would go on to represent Argentina at senior level, with 12 of them ultimately taking part in at least one World Cup.

Argentina’s opening match was a 6-0 win against Serbia and Montenegro, a score line which they would repeat two years later in Germany at the World Cup. Cesar DELGADO, Cristian GONZALEZ, Carlos TEVEZ (two goals), Gabriel HEINZE and Mauro ROSALES would score in that match.

The second match would come against Tunisia with a modest 2-0 win, Carlos TEVEZ once more on the score sheet with Javier SAVIOLA also scoring.

Andres D’ALESSANDRO would go on to score his first goal of the tournament in the final group stage match in a 1-0 win vs. Australia.

In the quarter finals, a Carlos TEVZ hattrick and Cesar DELGADO’s second goal of the tournament were enough for a victory against Costa Rica.

Carlos TEVEZ continued to make the tournament his own, scoring a lovely goal against Italy while Luis GONZALEZ and Mauro ROSALES added one each in a 3-0 win.

Paraguay were the opponents in the final and once more Carlos TEVEZ would prove to be the hero. Scoring the lone goal in a 1-0 win as Argentina would get their first gold medal at the Summer Olympics in football.

Carlos Tevez was La Albiceleste's Athens hero, grabbing their winner in the final – one of 8⃣ goals he scored en route to finishing as the tournament's top scorer 👏pic.twitter.com/yQSyMRrm21