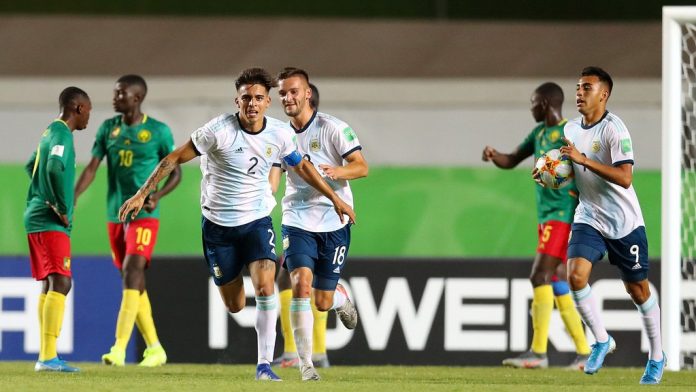 Argentina won for the first time at thw U17 World Cup in a 3-1 victory vs. Cameroon.

Pablo Aimar’s team drew 0-0 vs. Soain in their opening game but mabaged the three points in their second. Argentina were trailing 1-0 at half time and it was three goals in the second half which propelled them to victory.

Aimar’s team would let in the first goal off a set piece as Cameroon would score early in the first half on a corner kick. Argentina would reply with a corner kick goal of their own to draw level. Francisco Flores would pounce on an open header and score Argentina’s first.

Exequiel Zeballos would win a foot race agaunst the goalkeeper and would unselfishly pass it to Juan Pablo Krilanovich who scored an open net.

Lautaro Cano would beat the offside trap and play a low pass into Matias Godoy for the third.

The next game for Argentina is on Sunday, November 3 vs. Tajikistan.