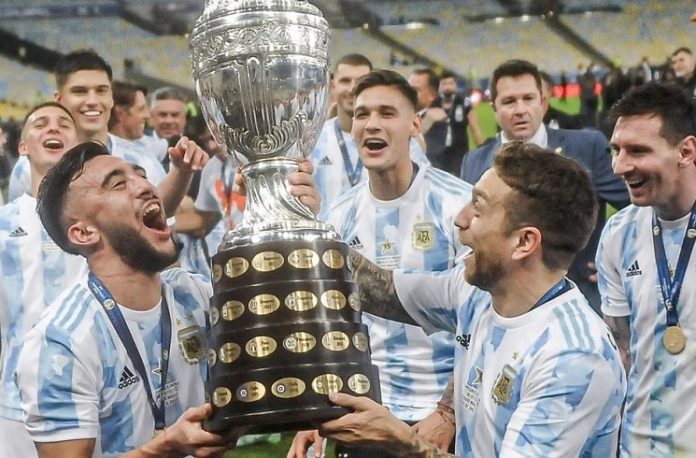 Nicolas Gonzalez spoke about winning the Copa America with Argentina, what it meant for Lionel Messi, his response to the Brazilian players, Lionel Scaloni and the World Cup.

Gonzalez was a regular starter for Argentina in their Copa America winning campaign. Despite not starting the final itself, Gonzalez was often in the starting eleven, on the left side of the pitch. And while he didn’t start the final, he was present as Lionel Messi gave his speech before the match. Speaking in an interview with Ole, here is what Gonzalez revealed about Messi:

“Before the final, Messi told us that playing against them (Brazil) at the Maracaná was a miracle. And that they had the cup there for us to to win it. When be said that, more than one of us got goosebumps.

“When the match just ended, we all went to hug Messi because we knew what it meant for him. And also for Kun (Aguero), for Fideo (Angel Di Maria) and Otamendi, that have been fighting for it for so long. That it happened this way is something unique that they won’t ever forget.

“On a day to day basis, Messi was very comfortable and happy with all the boys. And this was later reflected on the pitch. You have to enjoy Messi because for the Argentine, he is everything.

“Seeing him as happy as a kid in a toy store is engraved in the head of every player.”

“I’m very thankful to Scaloni. There are coaches that back you a lot and he is one of them. He backs his player to the death. He waited for me until the end. I enjoy Scaloni, he makes me play freely. There’s a lot of joy in every one of the players.”

As we posted a few days ago, there was back and forth posts between a few of the Argentina players and Richarlison of Brazil. Gonzalez even spoke about that:

“How are we going to tell the Brazilians something? Leave them alone, that they keep crying. I think the pictures of Dibu (Emiliano Martinez) and Rodrigo (De Paul) were very good. It was incredible how much I laughed when I saw them but let them talk because we are happy with (winning) the Copa America in their home.”

In regards to what and how much it cost the team to win the Copa America:

“It was very difficult to be isolated for 45 days. We all went for one objective: To win the Copa America. Every day we were focused on that, no one ever deviated away from it. Thankfully it happened but we thought a lot about our families, some became fathers and couldn’t see their kids. But we were focused in bringing joy to the people and we came back from Brazil happy.”

And finally, Gonzalez commented on the World Cup:

“The Argentine will always ask for more. We will do our best to fight until the very end at the World Cup in Qatar, just as we have been doing and how the guys before us did.”