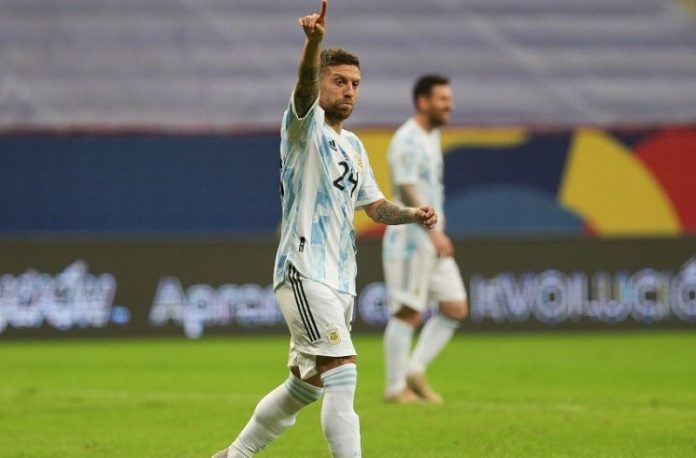 “It was something epic and historic. The team was fine but we started slowly and got better as it wore on. As a group of people, we were very good, like a family, and that’s what brought Argentina the long-awaited title. There were a lot of celebrations as there was an entire generation that had never seen Argentina as champions. And after losing so many finals, we needed that title. It was something of a millstone for veterans like Leo, Kun, Otamendi, Di Maria, along with many others who, despite losing finals, performed very well. We were lucky enough to be in the right place at the right time.”

“It was something unique. I came to Sevilla to compete in a top league and with the idea of the Copa America. I got the chance to take part and managed to score two goals, winning a title with Argentina at the age of 33 after just a handful of games. Someone must have waved a magic wand at me – there’s no other explanation.”

“For us, he is number one and the main man. Messi makes us feel like an intimate part of his life. It’s a gift, something we enjoy when we’re with him. In terms of the football, there are no more adjectives to describe him… Seeing him on a day-to-day basis, on different occasions and in diverse situations is crazy. You try to learn from him, but it’s very difficult to imitate a genius, as they possess special qualities and come along maybe once every 50 years. When you see him do his thing, sometimes you have to laugh, but what we enjoy most is being close to him – sharing many small things and details.

On if Lionel Messi spoke to them about the World Cup or not:

“He already came very close to winning it, within one game… It’s going to be a different World Cup: a November one and maybe his last due to his by age. Also Argentina will go into it in good shape and enjoying a nice moment, with the weight lifted from us thanks to the Copa America title. All Argentinians as well as his team-mates want to help him, and we want to give him the opportunity to win the World Cup. He hasn’t asked us for anything, but we know it.”

“I understood I had to get into goalscoring positions more often. That Atalanta side were very attack-minded and built around a particular style of play with me as the finisher. It was quite extraordinary. With Argentina I won the U-20 World Cup at Canada 2007, but I was never called up after that (to the senior team). Italy wanted me to declare for them, but I couldn’t because of the 2007 tournament. It was my best season and Argentina were need at the time with things not going great in their quest to qualify for Russia 2018. It was incredible and something I’d long been striving for. It also coincided with me re-joining old team-mates from 2007 like Banega, Di Maria and Kun [Aguero].”

“He inherited an Argentina side that had just been eliminated from 2018 World Cup, and he’s done very well in first assignment as head coach. That deserves a lot of credit. He’s surrounded himself with people like Walter Samuel, Roberto Ayala and Pablo Aimar, all experts and former internationals, and has assembled a good group focused on working hard and improving. The coach has given a new face to Argentina and proven his worth. He also has a clear idea of how the team should play, and he puts us at ease and makes us all feel important without complicating things.”

If Argentina are favorites to win the World Cup:

“With its history and name, Argentina start as favourites. If I’m totally honest, we have some of the best players in the world and won the Copa America undefeated. But you have to respect others and keep in mind that there are five or six European teams plus Brazil who are very strong. It’s going to be a very nice World Cup with a surprise or two. You also need a bit of luck too. It will be hard, but I think we have the requisite tools to go as far as possible.”

And if we will see the Papu dance at the World Cup:

“That’s my goal. Hopefully it will be my first and last World Cup, something extraordinary to crown my career. I have to keep doing things right with Sevilla, stay competitive and try to help the team. The time will pass quickly. There’s about a year to go, and my aim is to be among the 23-man squad and be able to play at that World Cup.”