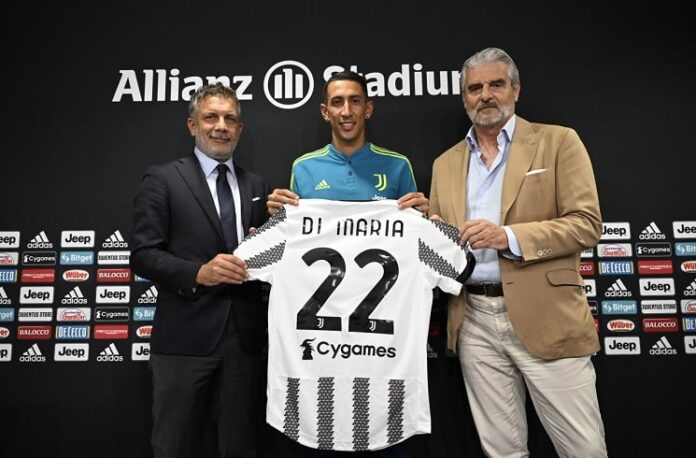 Ángel Di María has signed with Juventus and spoke at a press conference on Monday about the World Cup and Leandro Paredes.

“I am delighted to be here and to be able to wear this shirt. Joining this club is fantastic, my family and I have been welcomed with great affection. I thank you all.

“The same Di Maria as always has arrived, who wants to win at all costs, who hates to lose and wants to be a champion: I think Juve chose me for this. The most important thing will be to work hard and I will try to do my best.”

In regards to the Argentina national team and the World Cup:

“My head is now solely and exclusively at Juve. I came here to win and work with this great club, we will think about the national team when the time comes to think about it. I want to win with Juventus.

“The World Cup is one of the best experiences for a player, but it is essential to have your head focused on the present. I repeat, I will always do my best for Juve. I always give my best to every new beginning and it will be the same here.”

On if he spoke to Leandro Paredes:

“If Paredes asked me something about the Juve world? We are very friends, but we talk about other things.”

“If an important team like Juve is looking for you, it is almost impossible to say no. They waited patiently for the end of my contract, I really wanted to come here. I was calm with my family, and the right moment came.

“I chose Juve because they are the most important club in Italy and have all the credentials to be able to win. I know it’s a strong team and I want to be part of this team. If they have looked for me, it means that they believe me to be up to it.

“I have a good relationship with Gianluigi Buffon. I also talked to him when I signed the contract. He wanted me to come to Juve and I think being here is very nice. I am calm and I will do my best to help Juventus win.

“Juve is Juve, they have won many titles and they are a great club that now has a great desire to return to the highest levels. I want to make this happen. It will be important to form a united group!

“Everyone welcomed me well and already make me feel like one of them and this is a beautiful thing that struck me right away. It was something that I had anticipated and now I am living it with great pleasure.”

Regarding this year and his role:

“In football, everything changes quickly, everything with Juve went very well from the first contacts. Now let’s think about this year, let’s try to win as much as possible and then the time will come to think about the future.

“My favourite role? I like to offer assists and I hope to get a lot of them this year. In general, I like being part of a larger group.

“I like to play in any role, I have a strong character and I always want to win and fight hard to do so. The position I prefer is that of right attacker, but the Coach will choose where to deploy me.”