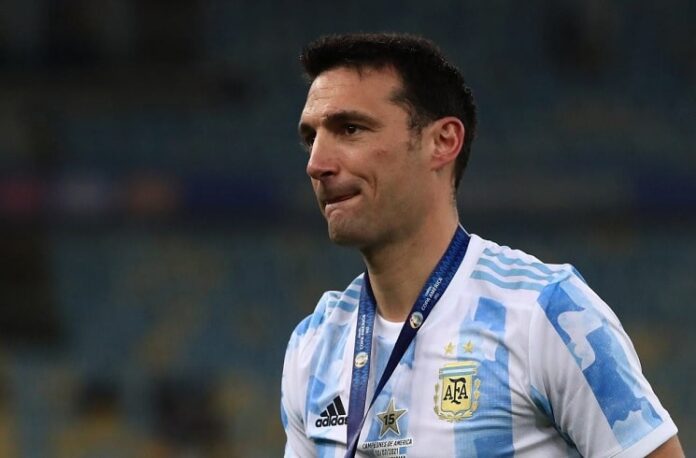 Lionel Scaloni spoke on a podcast about several topics. Speaking with Martín Reich y Sebastián Varela del Río of La Selecta podcast, here is what he had to say:

“The other day, I went to see my son play while I was dressed in Argentina national team clothes. It doesn’t seem bad to me that the players do the same, that they wear a team clothing all the time.

“In fact, it seems positive to me. It’s what we have always asked of them: Commitment, sense of belonging because the national team is not forever. It’s to take advantage of the moment and to stay as long as possible. Not to fall asleep because there are others coming in.”

Scaloni spoke about playing with the Argentina national team:

“The national team is a place of privilege. And I think that hasn’t changed beyond the fact that there was a time where the national team wasn’t as respected. Which for me was a hit strange because any player dreams of playing for hte national team, it’s something unique.

“These are things that leave a mark on you. It’s very difficult to reach a national team and even more so one like Argentina. That’s why everytime we call a player up, we tell them to enjoy themselves, that our goal is not for them to wear the shirt just once but many times. It’s a place that is difficult to get to and above all, to stay.”

In regards to the good atmosphere within the Argentina national team:

“I was in many groups with the Argentina national team and the atmosphere was always good. What happens is that when you win, everything seems to be better than before and in reality, it’s not.

“Surely the group which reached the finals of the 2014 World Cup and the 2015 and 2016 Copa America’s, the atmosphere must have been the same if not better than this. When you win, everything is magnified, although it is evident that today, the atmosphere is very good.”

Regarding the 2022 Qatar World Cup:

“It doesn’t make much sense to continously think about the World Cup. There’s a long way to go. You have to stay in line, to think of the players who are there and those who can fight for a place. Because any unforseen event can change your planning.

“Logically, we have already marked the opponents, we know who they are, we are watching them, analyzing but you cannot spend three months continuously looking at them either because there are many games left and everything can still change. You have to keep your feet on the ground. It’s the most important thing.”

About winning but playing well:

“I have changed a lot my way of thinking in relation to when I was a player. Today, I don’t just want to win but I want to do it playing well. I think any coach today will tell you that. It’s not just win, win, win, win. Logically, winning helps. But if you win playing well, it’s much better and the road is much easier for you to do better.

“I am convinced that if you try to play well and you do, in the end, you will win.”

Having to speak to the players:

“I was always an extrovert. I never had a problem speaking in front of groups. In fact, my greatest virtue was always being in groups, being positive and speaking when i had to.

“I never worried about sitting in front of a group and being able to speak as I always did: Frankly, being direct, no going back because at the end, you can tell these guys a lie once but the second time, they’ve already marked you.

“It is very important (that the players believe you) because after that is the tactical system and the strategies and everything that is related to football. It’s important how you play, how you attack and defend but it’s just as important that the players come out convinced of what they want, of what the coach tells them, of what his team mates are going to do because that marks everyone.”

Being coach of the Argentina national team:

“I’m not thinking all the time about the position I’m in, it would be counterproductive and maybe you’ll believe something that you really aren’t.

“I’m only a football coach, of this Argentina national team and nothing more than that. In a country like Argentina, you can get confused and that’s clear to the entire coaching staff.

“We know that we train a group of players and we only talk about football. If we believe ourselves to be more than that, it would be a mistake. Then we speak from the role that we have, which is to train them. In some cases, there are some more personal aspects, in the sense of behavior, of how they have to be when they join us, each one has their life and we don’t enter into that. But when we have to talk, we speak clearly.”