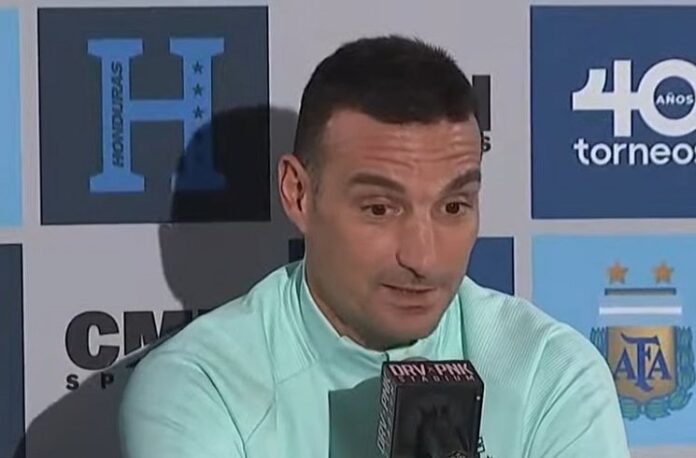 Lionel Scaloni spoke at a press conference on Thursday in Miami before the team’s game vs. Honduras. Argentina play Honduras on Friday in Miami at the Hard Rock stadium and are presently training at Inter Miami’s facilities.

Scaloni held the press conference where he spoke about the injuries. Here is what he had to say about the team:

“The important thing is that the team plays well and respects the opponent. We respect Honduras because they are a national team with tradition and have always had good players.

“Those who follow the national team know that the base is always the same. This team has shown that it always plays the same way, beyond the names. Tomorrow we are going to have some changes.”

“With me, he will always play. There are no doubts. He will play and he will always be on the pitch. He is a different case from everyone else, needless to say. He is happy, he is well. The team has taken a step forward. I spoke with Messi and he always wants to play.”

In regards to the injuries to Juan Foyth and Exequiel Palacios:

“Juan’s case is particular because he can play as a fullback or in the middle. He gives you many possibilities. I don’t know for how long he will be out for, if he will get there in good condition.

“What I am worried about is that Palacios recovers, that he arrives well. After, at a World Cup, there is no time. You have to value it. He is in good form. He is a player that for us, has always been there. It’s important for me that the moment to give the list, it would be a technical decision and not one because of an injury.

“The situation with Cuti Romero hurts me. He is stuck in Argentina and cannot travel. It’s a problem, the last day for us to get together and he can’t be here yet. I haven’t been able to talk to Lisandro yet but I know that if he is fit enough, he will play.”

“In both spots in midfield. He is a very complete midfielder. He is midfield player. Everyone that is called up has a chance to play. We value that he could have his chance. He is here with the group. He can bring things. Exequiel Palacios couldn’t be here, we will see when the moment to decide arrives.”

“With the players on the pitch, they don’t think about anything that isn’t the game. You have to remove the nervousness of what’s to come. It’s the World Cup, everyone’s dream. They have to have continuity at their club. They don’t have to think about “if I get hurt or not”.

“To get to the World Cup in the best conditions, every player must have minutes at their clubs.

“When the moment has come to give the list for the World Cup, we will have to see how each player is doing. Today, it would be useless to say how many defenderes, midfielders and forwards we are going to bring.”

The coach also commented on Enzo Fernandez and Thiago Almada:

“They have a chance to play. That is why they are called up. We saw that they are at a good level. They could be the future of the national team. Also thinking that they could be in the final list.”