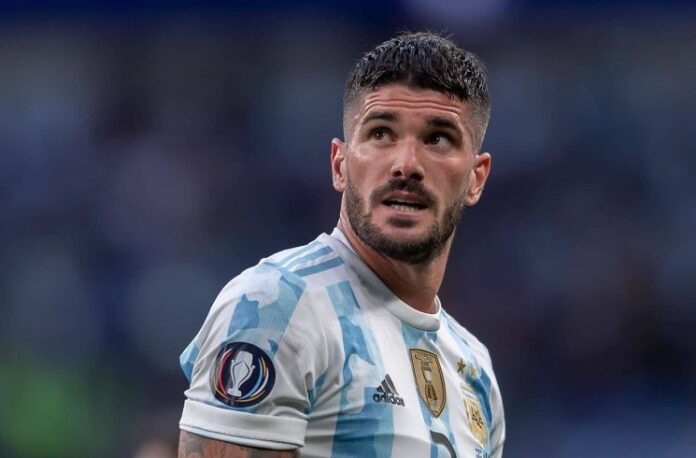 Rodrigo De Paul commented on the Argentina national team, the World Cup and the Copa America.

De Paul has taken part in the undefeated streak of the Argentina national team. He gave the assist to Ángel Di María in the Copa America final where Argentina lifted the trophy.

He is an undisputed starter for coach Lionel Scaloni and will start for Argentina in their friendly game vs. Honduras on Friday. Speaking in an interview with TyC Sports, De Paul spoke about the Copa America. Here is what he had to say:

“It’s very difficult to be able to disconnect because someone will remind you of it again. There is less and less to go and the World Cup is in my head every day. The level that is seen after the 2021 Copa America is that of a team that is very committed and very excited.”

“I always say that I don’t want it to start because I probably won’t enjoy it. It’s a lot of pressure, competition, nervousness and anxiety. It’s very difficult. I try to enjoy this whole process. I would like for it to be more, sometimes it’s difficult for me. It will surely be crazy. One lives very focused and the criticism can sometimes even be harmful.

“Look, you try to to do your job as best as possible. Yes, I enjoy the lead up to the games and the week of training but when the competition starts, it costs me. Being taken to a World Cup, the most important competition and one that you always dream of, I know that it’s going to cost me a lot, everything.”

“Competing is always important. I believe it’s important to keep competing because mentally it helps you and it will make the road to the World Cup faster. The idea is to always get there 100%. The coaching staff knows us a lot. To play or not at this point I don’t believe changes much. Lionel Scaloni has the idea and the base of this for the last four years.”

Regarding the difference between European and South American teams:

“The team showed that playing against Italy, the last European champions, that they did very well. I don’t feel like we’re at a different pace. Each competition has its things, some are more physical and others dynamic. We are prepared to face any type of situation.”

The Argentine also spoke about the Argentina national team:

“We are very sure of the team we have. We face all teams in which the majority of the players play outside and we have competed. We have more than 30 games without losing. The one against Italy cleared some doubts but not internally.”

“It’s an appearance that makes us very happy. The rechanging continues to appear. These young kids are going to give a lot. For us, it’s incredible. I hope that those of us in the middle (age wise), can help them today as the greatest one’s, Lionel Messi and Ángel Di María helped us. I have no doubt that he will be an important part of the coming years.”

His connection with the Argentina national team shirt:

“It’s very strong. Winning two titles, being the player with the most undefeated games with this shirt after so many monsters had passed. It’s also true that you never stop feeling like a national team player because players keep coming out all the time. We are a country that produces incredible players and you have to keep working. I feel that people love me, that the group appreciates me, respects me and trusts me.

“With this shirt, you always have to give a plus. It’s good and important to feel that. For me, it’s happening today because I feel very confident. I go out onto the pitch and feel that it will go well for us, I have a spectacular relationship with everyone.

“I feel comfortable as if I were at home and that transmits on the pitch. I will always give what I have because I am grateful for having been born in Argentina. It has allowed me to live more spectacular moments in my life. I will never get over the final in Brazil. There is something yes and hopefully it’s given to us.”