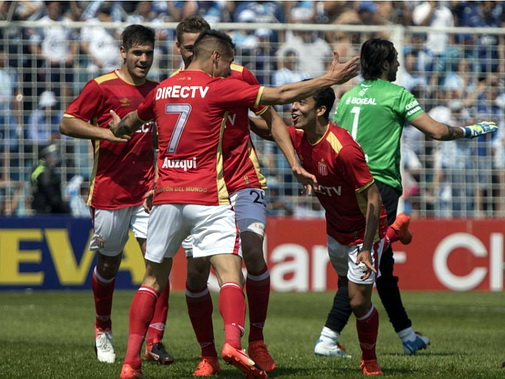 The following was written by Mundo’s own Jack Tilghman. Make sure to follow him on Twitter @JackTilghman.

In yet another massive weekend of Argentine football with 15 (yes 15!) first division matches, both of Argentina’s giants Boca Juniors and River Plate drew 1-1 after squandering leads.

Missing the suspended Carlos Tevez, Boca travelled to Mendoza, at the foot of the Andes in Argentina’s leading wine region, with the expectation of building on last week’s 3-0 with 10 men (after Tevez’s sending off) over Belgrano de Cordoba.

Without Tevez, the Barros-Schelloto twins, Guillermo and Gustavo, turned to Dario Benedetto who was signed for 5 million dollars from America of Mexico in July, to lead the sign supported by always troubled former Argentina Under 20 international Ricardo Centurion, Federico Carrizo, and Argentina Under 23 man Cristian Pavon. The combinations did not work and Argentina trouble to break down the stubborn mendocinos until late in the second half when Gino Peruzzi, 5 times capped by the full Argentina side, bundled in Pablo Perez cross. The lead however was short lived, as a swift Godoy Cruz counter was finished off by Javier Correa.

The most worrying aspect of the game for Boca fans will be the inability to break down Godoy Cruz’s stubborn defense, and in particular the form of Dario Benedetto. 5 million dollars may not seem like much in European terms, but in Argentine football it is a fortune. Think spending 90 million on Higuain type fortune. Benedetto so far has failed to live up to the price tag since arrive from Mexico and was heavily criticized in Boca’s elimination in the Copa Libertadores and has yet to revert the situation in the domestic tournament.

River’s match at home to San Martin de San Juan was very similar as the met a resilient side coached by former River player Pablo Lavallen. The match gave River fans a chance to honor defender Jonathan Maidana, a member of the Argentina squad at the Copa America Centenario, for completing 200 games for the club.

While his participation in next months World Cup qualifiers is still in doubt, Lucas Alario continued his great form with River with brilliant header from Nacho Fernandez’ cross after 38 minutes. Unfortunately for River, it was the only really chance for the Argentina man all match and San Martin was able to equalize.

Late on, Uruguayan forward Ivan Alonso hit the cross bar, but it was not enough and River left frustrated by the draw as a win would have kept them perfect and atop the table. Now, the millonarios will turn their attention to Thursday night’s Copa Argentina match vs. Arsenal (no not that Arsenal). In the past, the Copa Argentina has always been a tertiary competition, but with the winner earning a qualifying spot for the Copa Libertadores it has taken on new meaning not just for River, but for Boca and Racing as well, as it is the last chance all three have of qualifying for the the most prestigious club tournament this side of the Atlantic.

With River unable to win, the leader after three rounds is none other than Estudiantes de La Plata. The club, who’s President is former Manchester United and Chelsea player Juan Sebastian Veron, has much history in Argentine football having been the first club from outside greater Buenos Aires to win the league championship and also for being 4 time champions of Copa Libertadores,

With youngster Santiago Ascacibar, you may remember him from the olympics as Argentina only decent performer, pulling the strings, the rat stabbers won 2-0 away in the northwest province of Tuchman to Atletico thanks two a pair of goals from Carlos Auzqui.

Else where around the league, San Lorenzo topped Velez 2-1 in a pseudo derby. Overtime, the match has become quite a rivalry with Velez’s success under Carlos Bianchi in the 1990s and the presence of Huracan, San Lorenzo’s tradition rivals who languished for years and years in the second division, Velez supporter “chose” San Lorenzo to be there derby rivalry. San Lorenzo fans have always dismissed this, as they feel they sit at the big table of Argentine football with the likes of Boca, River, Independiente, and Racing and that Velez is far below them.

Despite what they may say, the match still means so much to San Lorenzo’s supporters who were thrilled to pull of a 2-1 victory with a brilliant display from Sebastion Blanco, formerly of West Bromwich Albion in England’s Premier League, who opened the scoring with a brilliant long range blast before a great run and pull back for ex-Boca striker Nicolas Blandi to blast the winner into the corner.

Avellaneda giants Independiente and Racing both drew 1-1 against rivals from southern part of great Buenos Aires, Quilmes and Defensa and Justicia respectively.

Independiente need a late goal as they trailed to the beer makers (Quilmes is the municipality where the beer, Quilmes, Argentina’s most popular beer is brewed) but with an inspired Nicolas Tagliafico the equalizer came. After playing a one-two, the former Banfield man raced to the end line and pulled the ball back for Emiliano Rigoni to slot in at the near post.

Many fans may remember Tagliafico as the left back on Argentina’s Under 20 World Cup side from 2011 that had all the tools to win the trophy with the likes of Erik Lamela, German Pezzella, Roberto Pereyra, and Juan Manuel Iturbe, amongst other, but came up short in the quarter finals against Portugal in a penalty shoot out.

Tagliafico may not yet have made the move to European football, but he is reportedly being followed closely by national team boss Edgardo Bauza and could very well find himself in the squad for next month’s World Cup qualifiers.

Racing, missing Lisandro Lopez through injury, could not hold onto Sergio Vittor’s opener against Defensa y Justicia, where the big news was the debut of one of Diego Maradona’s favorites during the 2010 World Cup: ex- Newcastle winger Jonas Gutierrez, who played the full 90 minutes in his return to Argentine football.