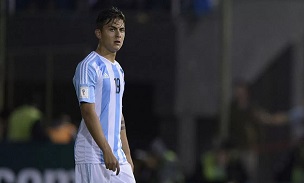 Paulo DYBALA has picked up an injury and is a doubt for Argentina.

Paulo DYBALA has picked up yet another injury while playing for Juventus. The injury was initially feared to be a tear but it has since been reported that it is not. DYBALA is expected to be out for 2 weeks and is a doubt for next month’s World Cup Qualifying.

There are rumors that Fernando BELLUSCHI could be called as a replacement.