Fresh from their win against Brazil in Melbourne, the Argentina squad flew to Singapore the next day and have arrived at Changi Airport at about 4pm local time.

All the squad members and coaching staff were at present except for Gonzalo HIGUAIN and Nicolas OTAMENDI. Upon arriving, they headed straight to their hotel which is the Fullerton Bay Hotel. They were greeted by several fans who waited outside at the airport.

Of course the big question among the local media was the status of Lionel MESSI involvement in Tuesday’s night fixture?

Well much to the happiness of the local crowd, MESSI did joined the team on this trip and spent several hours with the rest of the squad at their hotel in Singapore. But later on he catches a flight to Catalunya where he is expected to finalized and renew his contract with Barcelona. From thereon, he will head straight to Rosario for his much talked about wedding. 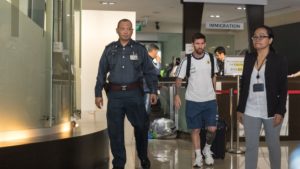 The rest of the squad spent a couple of hours at their hotel. Later that night, they conducted their first training session in Singapore at the Bishan Stadium. 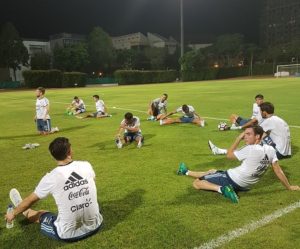 Meanwhile in the absence of Higuain and Mauro ICARDI still undergoing rehabilitation on his injury, Lucas ALARIO is likely to start as the center forward against Singapore. 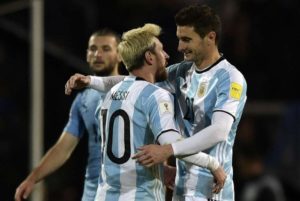