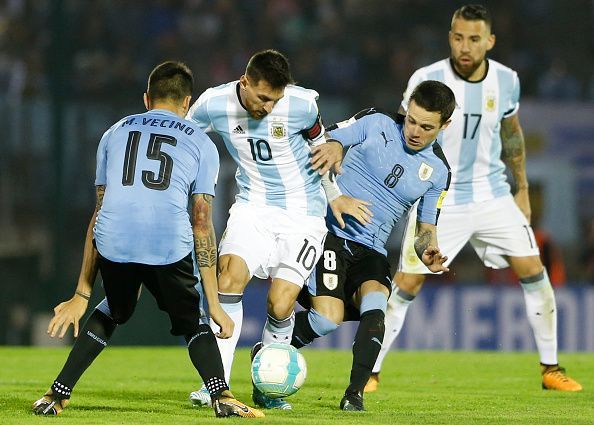 As Uruguay met Argentina in a crucial World Cup Qualifier today after MESSI and SUAREZ wore the kits supporting two countries bid for 2030, it promised to be more than a dull goalless draw. Uruguay are still sitting 3rd while Argentina still are in the playoff spot. Both teams have 3 more games to improve but South American Qualifiers are getting ridiculously tight for everyone except Brazil and Bolivia. Brazil already qualified and Bolivia is already out of the equation for the 2018 World Cup in Russia. Between them any team can end up in the top 4 and play off position.

It was the first official qualifier under Jorge SAMPAOLI for Argentina. How his team has done we will have a look. He started with a 3-2-4-1 with Mauro ICARDI as the lone striker and ROMERO as goalkeeper. Tabarez went with the 5-3-1-1 option as was SUAREZ upfront with CAVANI joining him on the attack. The idea was to block any space in the middle for MESSI and Paulo DYBALA with their three defensive midfielders along with CAVANI. SAMPAOLI looked for width and on the right flank there was Marcus ACUNA and on the left was Angel DI MARIA. We will look on some key points from the match from an Argentina perspective.

Under previous coaches one of the major issues for Argentina was slow transition and side ways passing. With Uruguay able to block the middle, it all depended on how the midfield would co-ordinate with MESSI who had some successful runs towards Uruguay’s goal, although tactically the Uruguayans fouled him and marked him in 3’s and 4’s but he was the only spark from Argentina’s perspective. PIZZARO and BIGLIA did the basic things right but the transition of the ball was too slow and did not move it fast enough to give MESSI or DYBALA a chance to make their runs. Too many back passes and no desire to run in to open space is still there from central midfielders. There was hardly any creativity from midfield as Uruguay squeezed up all space on middle.

Frustration on the flanks

On both flanks Argentina arguably had the worst player of the game. Angel DI MARIA and ACUNA, the latter placed a lot of missed passes and misread his teammates’ runs. However, DI MARIA was even worse, got at least 8 to 10 clean chances to put crosses inside the area but never managed to do so. His blind crosses broke down the rhythm and the attacks for Argentina. It’s a shame ICARDI never got a proper cross, while Ivan PERISIC his Croat Inter team mate plays on the same flank and has created several goals for ICARDI. Not a single time DI MARIA could find him or other players in the box, as Uruguay’s plan of blocking the middle worked perfectly due to ineffectiveness on both wings. Later on, once ACOSTA came in for ACUNA and provided some runs but could not create anything.

One of the key things we were looking at was to see if the MESSI and DYBALA partnership would produce something brilliant. Only twice were they able to link up fantastically but MESSI’s attempt was saved by MUSLERA and the other was a bad ball by DI MARIA. But there’s always the possibility of a partnership being formed once Argentina can find someone creative in midfield to link the attack.

ICARDI returned as a striker in the national team after 4 long years and tussled hard against GODIN and GIMENEZ. Only once he received a ball from PASTORE in the dying stages and tried to turn and score in typical ICARDI fashion but GODIN was quick to read and ICARDI’s cry for a penalty was not given by the referee. He participated and pressed well. A lot must be seen in the next game but very much like CANDREVA and Joao MARIO who rarely produce anything for Inter; ICARDI heavily relies on PERISIC. Unfortunately, there was no PERISIC for him on the Argentine flank to produce anything. His run to MESSI’s through ball was brilliant and hints at a very promising future.

On defense, MERCADO, FAZIO and OTAMENDI produced a superb performance but there were moments when ROMERO almost messed up and gave away the ball to CAVANI who was in space. As the team continues to struggle to qualify, ROMERO remains as one of the major question marks along with DI MARIA on this team.

Special thanks to our guest writer and friend, Rony Mazumder from Bangladesh for sharing his thoughts on our match against Uruguay.