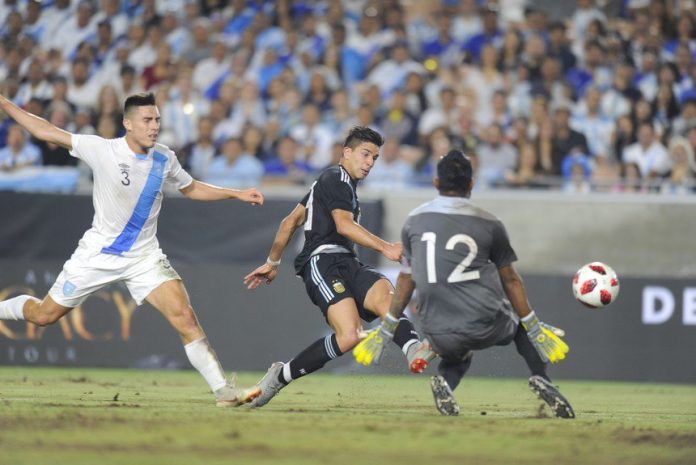 Several of the Argentina players spoke about the team’s 3-0 win against Guatemala.

“I believe we completed the objective, especially in the first half. Hopefully this guys will be the future of the Argentina National Team.

“We did what we wanted in the first half. I leave very satisfied, we were very intense in the match.

“They understood very well what it is to play with this shirt. We are very happy that a lot of these guys were able to play for the first time for the National Team.

“We will surely make changes for the second match.

“I think Renzo SARAVIA is a very intersting player. Today he showed what he can bring. He had a great match.”

Captain Nicolas TAGLIAFICO spoke like a real leader, saying that the team must be united:

“It’s good to be united, even off the pitch. We want to build a team for the future. We have to fix a lot of things, we are just in the beginning. I believe it was positive.

“It’s very beautiful to wear the Argentina shirt and wearing the captain’s armband is something unique.”

Giovanni SIMEONE, who scored on his Argentina National Team debut said this:

“I’m very happy. I have great team mates that gave everything to win. Beyond the opponent, there was a lot of anxiety to see this new Argentina. In the first half, we did everything we had to do.

“As a kid, my dad would always tell me that one day I would be here. I believe this is the road to follow.”

Givoani LO CELSO, who scored the goal of the night commented on the match:

“I’m very happy for the match the team played. We tried to do what the coach asked of us. We know the responsibility which comes with wearing this shirt. It’s important to start off on the right foot. Now we play Colombia, a big National Team.”