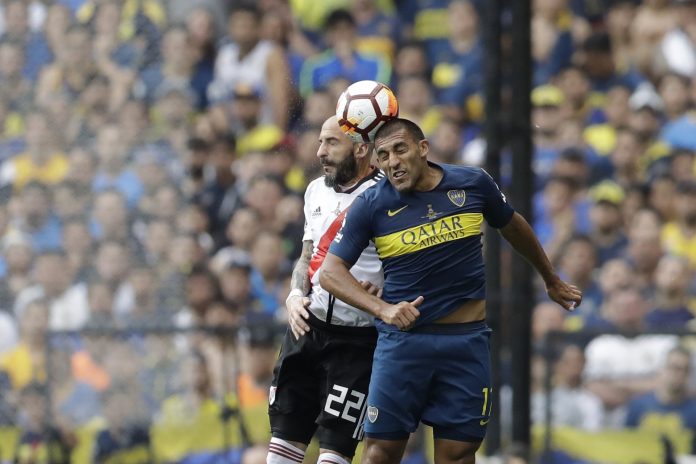 The following was written by the great Jack Tilghman. Make sure to give him a follow and a big thank you for this great article.

Quite often big matches underwhelm us, especially in this age of social media and 24/7 media coverage. Almost no match can live up to the hype. This past World Cup Final between France and Croatia had plenty of drama and six goals, the previous two World Cup Finals did not see a goal until after the 110 minute mark. The last two Copa America Finals were scoreless even after extratime and went to penalties. Yesterday’s first Final between Boca Juniors and River Plate at La Bombonera lived up, and then some.

River dominated the early stages, forcing Boca goalkeeper Agustin ROSSI into a few very good saves before the Xeneizes took the lead through Ramon ABILA in their first real attack of the match. Just second later, River’s much maligned forward Lucas PRATTO equalized, silencing the Bombonera crowd. When Boca took the lead again through substitute Dario BENEDETTO, River was again able to bounce back and tie the match. Yet the highest drama was yet to come. In the 89th minute, club idol Carlos TEVEZ charged through the middle and squared the ball to BENEDETTO who saw his shot saved in sensational fashion. “The save of the championship,” was what Boca radio announcer Daniel MOLLO called it.

Even for the neutral watching from home with no connection to either team or Argentina could feel the passion through their screens and sense the meaning of the occasion. Nothing was manufactured about this Superclasico Final, everything was organic. Although the match was hyped.

But why? The first answer is the sheer importance of football to Argentine society. Football is always in the discussion. Politics, entertainment, everything leads back to football. My mother often tells of her first day in school in 1965 when a girl asked every student who came in if they were a supporter of either River or Boca and the class was divided that way. 53 years later the rivalry is stronger than ever.

Another answer is that even though both Boca and River have nationwide and international followings, the rivalry stems from their birth together in the La Boca neighborhood in Buenos Aires. River moved out to the posh area or Recoleta then on to the leafy suburburb on Nuñez, while Boca has never moved. For a derby match to truly be a derby, the clubs have to be from the same city. You need to go to work or school on Monday morning and hear it if your team loses. Sure, there are Barcelona fans in Madrid, but the true derby of that city is Atletico vs. Real.

The sense of history and the knowledgable fans is another reason. Every River fan knows the story of Norberto “Beto” ALONSO and his goals against Boca in 1986, famously scored with an orange ball brought by Boca goalkeeper Hugo GATTI. Meanwhile, every Boca fan knows the story about River’s collapse against Peñarol of Uruguay in the 1966 Copa Libetadores Final that led to the club earning the nickname of Gallinas or chickens. Boca fans will also never forget River’s historic relegation in 2011. That sense of history really tells the story. Fans, players, coaches, and directors know that what happens in El Monumental on the 24th of November will echo through eternity and truly never be forgotten. Fans have long memories in Argentina, stretching back generations even before they were born.

Perhaps the biggest reason however is the importance of the two clubs over everything else. It doesn’t matter what 22 players are on the pitch, what matters is that they represent Boc and River. I often felt that the worst thing to happen to the Real Madrid-Barcelona rivalry was the Cristiano RONALDO and Lionel MESSI era. Instead of being about the two clubs and their storied rivalry, it became about the two stars players, particularly as American television companies began marketing the match. They began to hype it like an NBA match where the two star players were bigger than the match.

That is why perhaps the best comparison in American sports is college football. Players come and go, staying for a maximum of four years, while both Boca and River have long become accustomed to selling their best to Europe after only a few seasons. Yet despite constant shifting and changing in terms of the roster, the club badges and colors mean the most. People jam pack La Bombonera and El Monumental every Sunday to see their clubs play, not to see a specific player. That is the magic in of football. How many NBA fans have traded their allegiances between Miami Heat, Cleavland Cavaliers, and LA Lakers, just to follow Lebron JAMES?

Sadly, this culture from the NBA of supporting an individual player over a club has infiltrated European football with the rivalry between Cristiano and MESSI. I’m sure many people traded in their white Real Madrid shirts with #7 on the back traded them in for the black and white stripes of Juventus with RONALDO’s transfer to the Turin giants. Twitter battles rage about who’s the best between the two players, not the clubs they play on.

Yet in Argentina, BENEDETTO or PRATTO, BARRIOS or PONZIO, GALLARDO or Barros SCHELOTTO are debates you will hear in bars or cafes throughout Buenos Aires, but always in the context of the Superclasico Rivalry: Boca or River? River or Boca? That is truly the only question on everyone’s mind.