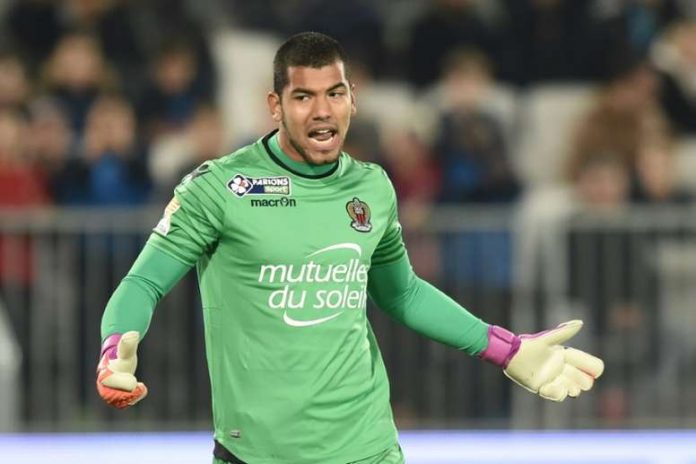 The following was written by the great Mouhamad Rachini. Make sure to give him a follow on Twitter.

163 days after blanking Les Gones with a nine-save effort, the 26-year old turned aside five attempts in a 1-0 win on February 10. It was Benitez’s tenth clean sheet of the season, the joint-most in Ligue 1. More importantly, it bumped Nice to 37 points on the season, just three away from an automatic Europa League qualification spot.

It has been a magnificent campaign for the Argentine, who leads Ligue 1 goalkeepers in nearly every significant category. His performances are even more impressive given the offence he plays behind. Through 24 league games, Nice have only found the back of the net 19 times. It’s the worst scoring rate in the league’s top 15 and is only three goals better than Guingamp’s league low of 16 goals. Only nine players have registered a league goal this season for Nice, and only one of them has scored more than three time (Allan Saint-Maximin, with six goals).

It’s a miracle Les Aiglons are in the league’s top ten, let alone challenging for a European spot.

And yet, it’s business as usual for Benitez. But while he’s earning plaudits in France and across Europe for his play, back in Argentina, it seems like very few of the Argentina Football Association’s heads have taken notice. The Argentina national team has played six matches since the start of the 2018/2019 season and not once did they call up Benitez. The 26-year old remains without a cap, despite experiencing the best season of his career.

For how long will that continue, though? By now, Benitez’s season can no longer be described as a hot streak, and sooner or later he will be called-up and capped by Argentina.

With the 2019 Copa America only four months away, could Benitez achieve that experience on a competitive stage?

With the way Benitez has played this season, it’s not too big of a stretch to suggest that the 26-year old makes his debut as the Albiceleste’s number one during the Copa America, if not before. After all, if you have arguably the hottest goalkeeper in your ranks going into a major competition, why not give him the reigns in the hope that his form carries into the tournament?

Well, because it’s a risk. A big risk. And would Argentina be willing to take that risk?

Heck, should they even consider it?

In this piece, I’m going to highlight Walter Benitez’s strengths, weaknesses, and statistics, in order to see whether he should start for the Albiceleste in June.

Walter Benitez has seen a lot of action this season, with the Argentine having faced about 4.48 shots on target per league game. Benitez has had to maintain a high degree of sharpness throughout his appearances, and that has allowed him to hone his skills to a stronger level.

Throughout the season, Benitez has shown to be an excellent shot-stopper. His ability to read shooters has benefitted him in pressure situations like penalties, and his shot awareness has aided him in making some top-notch saves (Lyon got a taste of it last weekend). He often meets attempts with two palms as opposed to one, which makes it difficult for powerful strikes to break through his parry. In regards to his mental game, we can’t say for certain what goes on inside of his head, but Benitez seems to handle pressure well. I mean, if you can start your season with a nine-save effort against one of France’s top teams, you’re unlikely to be fazed easily.

What really sets Benitez apart is his body type. Unlike most top goalkeepers, who are usually tall and thin, Benitez is stocky and built like a boulder. He’s 1.91 metres tall, about the average height of a top tier goalkeeper, but he weighs just over 200 lbs, which is on the heavier side. This gives him a slight advantage in aerial duels, though. Benitez has developed a reputation for being strong in the air. His bulky build, at little cost to his vertical jump, makes it difficult for opponents to overpower him physically. Combine thar with his confidence in aerial situations and Benitez is a genuine powerhouse in the air (some examples of his aerial command can be seen through this link).

Benitez isn’t without his faults. His rebound control could use some work; he tends to parry shots as opposed to collecting them. His rebounds sometimes end up in dangerous areas (such as directly in front of goal), which has put him at risk of conceding a second-chance effort multiple times. This particularly becomes an issue with dives. Due to Benitez’s build, it takes him slightly longer to recover from a diving save than the average goalkeeper. In the below clip, you can see a second-chance effort for Nantes that came out because of this.

This doesn’t take away from Benitez’s overall game, though. Rebounds are a normal part of football and Benitez has often showed quick footwork and movement despite his stocky build. As mentioned earlier, he’s also used it to his advantage when needed.

Considering his array of skills, it’s no wonder Walter Benitez has posted some of the best numbers in French club football this season.

Per NBC, Benitez leads Ligue 1 in almost every goalkeeper category. He’s tied for the league lead in clean sheets with 10, and he has kept a clean sheet roughly every two league games. He’s only conceded 17 goals this season, the lowest among all Ligue 1 goalkeepers with 10 or more appearances, and he’s conceded three or more goals just two times in 21 league matches. His goals-against-average (0.81) and save percentage (80.9%) also lead all Ligue 1 goalkeepers (10+ appearances). Only his total saves (76) have been bested, with Amiens’ Régis Gurtner (87) and Caen’s Brice Samba (81) topping him in that regard. Even then, no other Ligue 1 goalkeeper (10+ appearances) averages more saves per game from within the 18-yard box (2.1) and more saves in total (3.7) than the 26-year old, according to WhoScored.

These stats have also translated to a continental scale. In terms of clean sheets, only five goalkeepers in Europe’s top five league have kept more clean sheets than Benitez (Alisson Becker, Samir Handanović, Ederson, Jan Oblak, and Kepa Arrizabalaga). Furthermore, Benitez is the only goalkeeper in Europe’s top five leagues with a save percentage above 80%, and his goals-against-average (0.81) is lower than those of Gianluigi Donnarumma (0.91), Marc-Andre ter Stegen (1.00), Manuel Neuer (1.05), and David De Gea (1.35).

Statistically speaking, Benitez has played to an elite level this season, all while backstopping the second-driest offence in Ligue 1.

Despite everything seemingly working in his favour, Walter Benitez does face a challenge breaking into Argentina’s senior team through their deep goalkeeper pool. The Albiceleste boasts an embarrassment of riches when it comes to the goalkeeping department, with eight different ‘keepers having received a call-up and/or made an appearance for the senior team in the past year alone.

That last point is important to note because nearly every one of Benitez’s competitors for the starting role trumps him through experience. Whether it’s through competitive playing minutes, like Sergio Romero’s 96 caps or Franco Armani and Willy Caballero’s 2018 World Cup appearances, or consistent call-ups, like Agustín Marchesín, Nahuel Guzmán, and Gerónimo Rulli’s regular invitations, the rest of Argentina’s goalkeeper pool has a leg-up in that regard. Benitez has never even been called up to the senior national team, let alone earned a cap with them, and the last time he represented an Argentina youth team was back in 2013.

What Benitez lacks in experience though, he makes up for in age. Out of all of the
aforementioned goalkeepers, as well as recent Argentina call-ups Paulo Gazzaniga and Guido Herrera, Benitez is the youngest. He turned 26-years old less than a month ago (January 19), and he’s roughly eight months younger than the second youngest goalkeeper from the crew (Gerónimo Rulli). Benitez’s relatively young age gives him a significant advantage over those in their 30s, such as Guzmán, Armani and Marchesín. It also suggests that Benitez still has some growing to do, and with the next World Cup three years away, any growth will only benefit the Albiceleste.

Benitez also has the most going for him at the moment. Gerónimo Rulli is inconsistent and still isn’t trusted as a starter, despite some of the hype that surrounded him earlier in his career. Franco Armani, although he did appear in the 2018 World Cup, has been in and out of the national team squad since then, as have Agustín Marchesín and Nahuel Guzmán. Willy Caballero’s senior team career likely ended with the 2018 World Cup, and Paulo Gazzaniga’s has only just begun, although he’s at best Tottenham’s back-up. If Benitez keeps up the spectacular play that’s made him one of the top club goalkeepers this season, why shouldn’t he be called up for the 2019 Copa America squad?

The question isn’t whether he should just be called up, though. Rather, should he get the starting role in Brazil? That’s difficult to answer. On the one hand, if he’s had the best 2018/2019 season out of any considered Argentine ‘keeper, it seems only fair to give him a shot. On the other hand, Sergio Romero is his biggest competitor in that regard. Romero is the most capped goalkeeper in Argentina national team history and he’s by far the accepted starting goalkeeper for the Copa America. Given that he had to miss last year’s World Cup due to an injury, it’s unlikely Romero will give up a starting spot at a major tournament for the second year in a row.

Of course, it’s not impossible. After all, Romero has seen very limited action this season (just four starts, none of which in the league), and Benitez has played in more league games this season (21) than Romero has in the last six seasons combined (17). But that hasn’t stopped Argentina from starting Romero in major tournaments before and, barring an injury or special circumstance, it’ll unlikely stop them this year.

Nonetheless, Benitez has earned a right to at least a Copa America call-up. Snubbing arguably the most in-form goalkeeper the country has at the moment could cost the Albiceleste, be it in the short-term (the 2019 Copa America) or in the long run (future refusal to join the squad). Given the circumstances surrounding both Benitez’s play and the performances of other Argentina ‘keepers though, it seems only fair to give the Nice goalkeeper a shot.

Once more, a big thank you to Mouhamad Rachini for writing this.