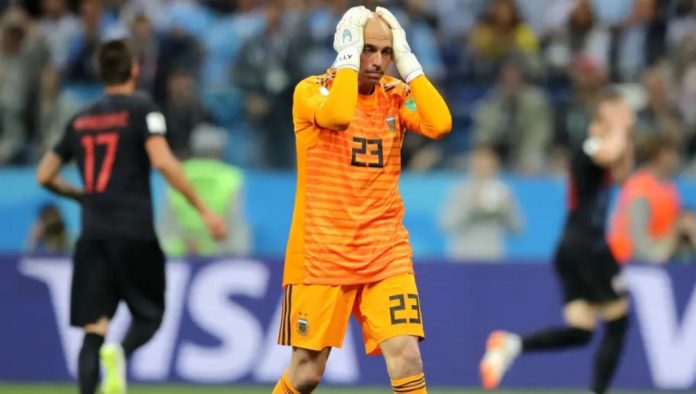 Argentina goalkeeper Willy CABALLERO explained what happened and how he was told that he wasn’t going to play against Nigeria at the FIFA World Cup.

Speaking in an interview with ESPN, the Chelsea shot stopper commented on what had happened between himself and Argentina coach Jorge SAMPAOLI as well as Franco ARMANI. Following his mistake against Croatia, here’s what CABALLERO had to say:

“Jorge (SAMPAOLI) called me to give me explinations but I told him that he didn’t have to explain. That I understood and that tomorrow (against Nigeria) we had to win to stay in the World Cup and that’s the only thing that was important.”

CABALLERO also spoke about what he told goalkeeper ARMANI:

“I was rooming with Franco (ARMANI) and I told him ‘He (SAMPAOLI) called me to tell me that tomorrow you’re playing, give it your all, rest well and everything will go well tomorrow, we are all with you. And that’s how it was.

“The World Cup for me, personally and individually, ended there but I still had the hunger of being World champion. I didn’t care about me, the important thing was us.”