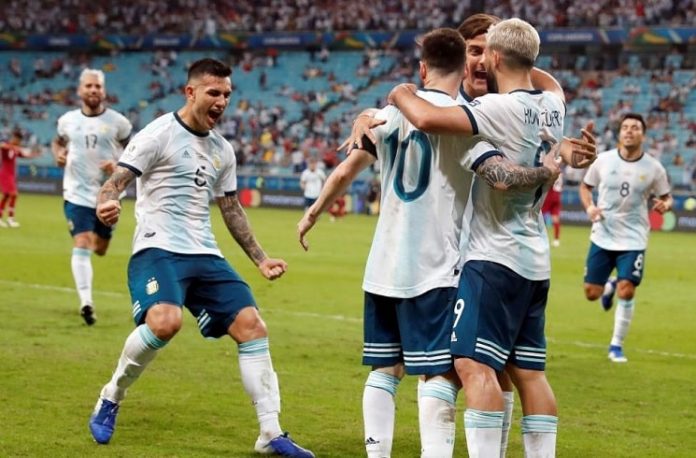 Lionel Messi and Sergio Aguero will reportedly be called-up to the Argentina national team for the two World Cup qualifiers later this month.

Argentina coach Lionel Scaloni will announce on Tuesday his list of players for the two World Cup qualifiers this month against Ecuador and Bolivia. The first match will take place against Ecuador at La Bombonera while the second will be at altitude in La Paz.

The road to 2022 begins as of Tuesday when Scaloni will announce the list. With the corona virus in full swing, there are fears that the global epidemic could keep players quarantined in country. However, per a report by TyC Sports, Scaloni will be looking to call European based players.

For the goalkeepers, two will be based in South America. Recent league champion Esteban Andrada of Boca Juniors along with veteran goalkeeper Franco Armani will make up the pair from South America. FC Porto’s Agustin Marchesin will be the third.

As for the back line, it’s rumored to be Gonzalo Montiel, German Pezzella, Nicolas Otamendi, Nicolas Tagliafico, Lucas Martinez Quarta and Juan Foyth. Two South American based players in Walter Kannemann of Gremio and Milton Casco of River Plate could be included as well.

In midfield, it’s a bit of what we see at last year’s Copa America. Leandro Paredes, Rodrigo De Paul, Exequiel Palacios, Gio Lo Celso, Marcos Acuna and Lucas Ocampos will make the team. One of Guido Rodriguez and Rodrigo Battaglia could make up that extra spot while the likes of Enzo Perez and Nacho Fernandez are being scouted as well.

In attack, there’s no place for Mauro Icardi as Lionel Messi, Paulo Dybala, Lautaro Martinez, Lucas Alario and Sergio Aguero will get the call.