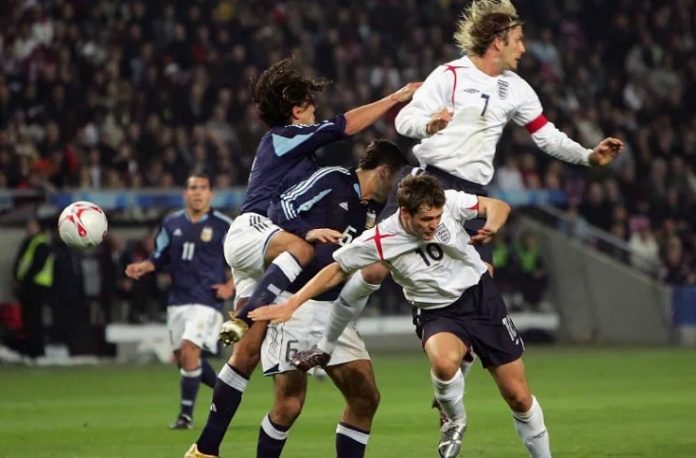 Always one to entertain, Argentina vs. England from 2005 was the last time these two countries met in a football match.

There’s the clash in 1966 at the World Cup, the Diego Maradona show in 1986, the World Cup classic in 1998 and tthe not-so-classic sequel four years after that. However, back on November 12, 2005 in Geneva, these two served up a friendly match to remember.

Five goals, a match full of stars and for Argentina, despite being on the losing end, it was a match which showed how dominant they can be. Both teams had qualified for the 2006 World Cup which was coming up the next year and both teams had fielded a very strong squad.

Of those 15, Javier Zanetti, Martin Demichelis and Walter Samuel would miss out on the big show in Germany a few months later.

The opening 10 minutes saw Walter Samuel completely boss David Beckham off the ball with this challenge.

Argentina would create a lot of chance and it would be Hernan Crespo who would score first and give Argentina the 1-0 lead. Maxi Rodriguez would play a pass into the penalty area which would take a deflection and Crespo with a poacher like finish would score his 29th goal for his country.

Wayne Rooney would equalise five minutes later as it would be 1-1 going into half time.

Argentina would be awarded a free kick in the second half. Up stepped Juan Roman Riquelme as the Villarreal man would send a cross in which would find Demichelis and he would head the ball towards the net but it would be Roberto Ayala who would score to give re-give Argentina the lead.

Juan Roman Riquelme would boss the midfield and dictate the match. From passes to crosses to shielding the ball, this was a vintage Riquelme performance. Riquelme would be substituted off in the 84th minute for Lucho Gonzalez and England would score twice afterwards, with less than 6 minutes left on the clock. A foreshadow of things to come at the World Cup.

Here are the match highlights and the full match.