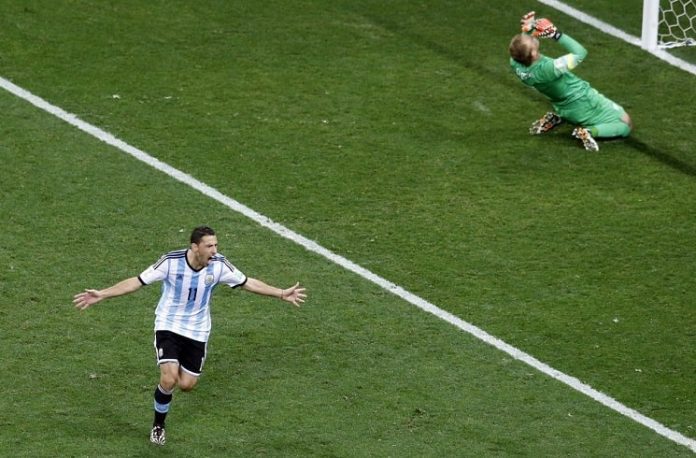 Maxi Rodriguez gave an interview with the AFA website where he spoke about his time with the youth team of Argentina, to playing in three World Cups, to being a coach and more.

A veteran of the Argentina national team, there’s very little Maxi Rodriguez hasn’t done. From playing, scoring in and winning an U20 World Cup to playing in a World Cup final, Maxi has been there and done that. Now 39 years old, Maxi was asked about his first time with the Argentina youth team. Here’s what he had to say:

“When I was in the youth teams, it marked me a lot as a player. Like a professional who was just starting his way. We would stay from Monday to Thursday and we would also be the sparring team for the 2002 Argentina national team.

“After that, for the 2002 World Cup we were also the sparring team and in 2001 there was the U20 World Cup (which was held in Argentina). I have the best memories of the work we did as a group with Jose (Pekerman) at the helm. And the group of team mates was also very nice and I think that all those memories marked me a lot for what came after.

“I learned a lot very quickly because I had to live with Jose at the time. And one time, I had to train with the sparring team for the senior team, when it was Bielsa, being a kid at the time, you take in everything faster and easier.”

How he lived his Argentina national team debut in 2003 with Marcelo Bielsa:

“I lived it as part of a dream come true… Something which you always see as so far away. Because when I was a kid, when I would go train at Newell’s in the youth teams, I always had those dreams, of being with the Argentina national team, of making my debut with Newell’s and I saw that they were all happening.

“Also, I had Pekerman as coach of the youth teams and well, being there and after that with Bielsa giving me my debut, they were very impactful things which happened but at the time, I enjoyed them a lot.”

About how those dreams that he imagined, with time, got him to play in three World Cups:

“In that point of view, I always give myself short term goals. I try not to dream about 10 years from now. I try to have short term goals. I always did things that way. I believe that every objective I put, I would continue with it and when one looks back, it’s impressive. One doesn’t dream of all of that but things were going on and I was enjoying it to the fullest.”

Regarding being part of a team which made the World Cup final, how he played a part in it and how he lived it:

“The way, above all, in Brazil, to be able to have the decisive penalty and being able to take Argentina back to a World Cup final after so many years, they are emotions which are so strong in a way you can’t be prepared for, not in a good way or a bad way.

“And regarding the final, we all had that illusion of being World champions… A few days prior, we were filled with such beautiful emotions, very strong. And after that, when the match was over, we were left with emotions very ugly and painful.”

When asked about his penalty goal vs. Netherlands and his winner vs. Mexico at the 2006 World Cup, if there was another goal he would put in that group:

“Yes, it’s a bit crazy because wherever you go, they remind you of those two goals. “The one with the important goals” and it’s strange to me. The goal vs. Mexico, which was incredible, in the way it all happened, it brings you to the next round and that also has a special meaning.

“The goal vs. the Netherlands too. They are moments which leave their mark on you. After that, there’s also a goal that marked me and it’s a goal I scored with the youth teams. I scored the first goal and the last goal in the final of the U20 2001 World Cup. And even more that it came as a team goal and I finished from a difficult angle.

“They are goals that happened in a very beautiful moment of my career and to close a World Cup with a goal is also very special.”

How he sees the current Argentina national team with Lionel Scaloni at the helm:

“With Leo, I had the possibility of being his team mate. So we have a bond where we’ve known each other for a long time.

“Every time, I see the Argentina national team as doing better. It wasn’t easy the rebuilding that he had to do. Someone that came with no experience and it’s not easy to coach a national team like Argentina. Because it is one of the most important in the world.

“There’s a lot of pressure from every corner. There are new players brought in that are very good. It’s not easy when there’s always the “obligation” to try and win. But I think he was building a solid team and that’s the most important thing and every time they are growing more. That is the most important and difficult thing that he has a solid base and to say “Well, I have these 15 players, these are my players”. But when he has that, it will be much easier and he is trying to do that.”

If he would like to be linked with football after retirement:

“Yes, I would like to be linked with football. If it is with the Argentina national team, it would be something very nice. I very much like everything that is the youth teams. Nowadays, I don’t see myself as a coach but I try to be a manager, to have a role like that. I like to be close to the players, what’s going on with them. Because a thousand things happen in a person’s mind.

“Sometimes the coach wants him to do well on the pitch but for that, the players has to be fully fit. I’m thinking of it as something still a bit far away. I still feel like a player and I’m enjoying it all. But one has to think about it because there’s little left in terms of football.”