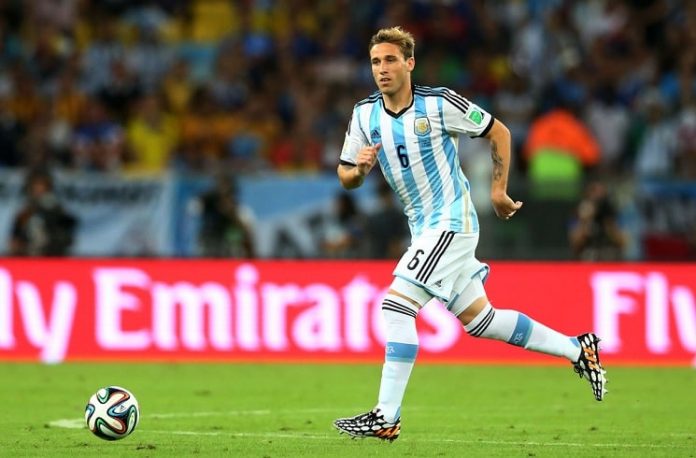 Lucas Biglia gave an interview with Fox Sports where he spoke about Jorge Sampaoli, the Argentina national team, France and more.

I went back and watched the final. It made me want to go get the medal, which I don’t know where its been for the past six years. I kept watching until the end because I wanted to remember what happened after the match. It hit very strongly seeing myself go up the stairs to wear it at a World Cup.

“Within myself, I think that on a professional level, I got second place. But on a personal or on a human level, I won a prize. I don’t know if it’s valued in this sport.”

About that team which made the final:

“The quality, on a human level that I lived with my colleagues, with the coaching staff, the medical staff, the staff, that’s the prize I keep with me. That group marked me. After that it’s analyzed if it was successful or not because those of 1978 and 1986 did well to lift the World Cup.

“Humility is priceless and that group was full of it. Everything was nice but since we didn’t win, it meant nothing. For example, Augusto Fernandez did not play a minute but he was the group one who was positive who got up with a smile and had the group there.”

Regarding why he quit the Argentina national team:

“I quit the Argentina national team because of a bit of everything, there are a lot of things that add up to the final decision. First and foremost, emotions. I gave everything and I always fought until the end and I ended up lifting nothing. You start taking it as everything being a failure.

“In the Argentina national team, I enjoyed it from 2011 until 2015-2016. After that, I suffered a lot and had a bad time. I put aside many things and I always prioritized the shirt over my health or my family. You don’t feel up to it and you’re unfairly criticized.

“I got to the point where I said enough with the punishment, why even suffer like this? I knew that I was giving too much to people who didn’t deserve it and they were not appreciating it. The straw which broke the camel’s back was the frustration of having given everything and not being able to lift anything.”

When asked about Jorge Sampaoli:

“I’m not going to get carried away with all that was said. We were never able to capture Sampaoli’s idea of playing an aggressive game. As much as you have successful players, if it’s not being reflected, you won’t get anywhere. We tried many different styles and we could never adapt. Sampaoli took a thousand planes to try to explain to us. Still, we lost to the champions who were superior to us on a physical level, not a football level.”

About being injured at the last World Cup:

“At the last World Cup, I got there with an injury. I shouldn’t have done it but for me, it was the best thing and it was priceless. I fought with my club because they wouldn’t allow me and at times with my family because I would leave at 8:00 and come back at 10:00 at night.

“They tell him a million things and he keeps going forward. He wanted to play injured and he fought with Real Madrid until an hour before the game.”