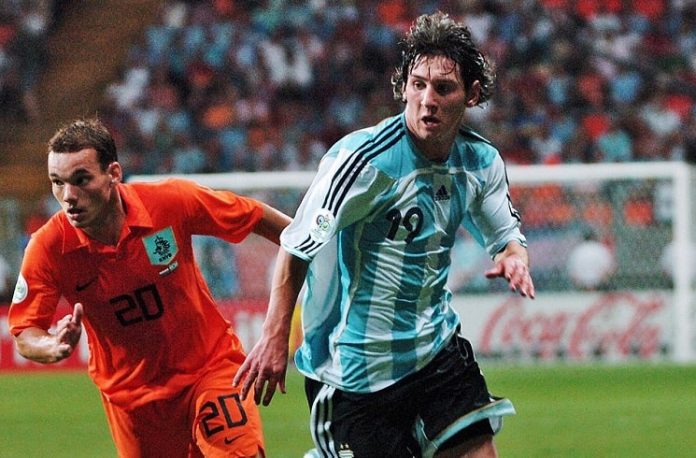 Roberto Ayala gave an interview where he spoke about Lionel Messi’s evolution in the Argentina national team as well as Dennis Bergkamp’s goal for the Netherlands at the 1998 World Cup against Argentina and much more.

Ayala was Messi’s team mate at the 2006 World Cup as well as the 2007 Copa AMerica. The former Argentina captain spoke about the current captain. Speaking with 90, here’s what Ayala had to say:

“Lio likes to be treated like anyone else. He’s a very closed person who has grown a lot in recent times. Today, he’s a leader on and off the pitch.

“When he first started, we were team mates, he practically didn’t speak. What’s more, he would go out and train because he had to. If not, he would have stayed in his room. Today, he participates in everything: He talks with his team mates, he asks them how they are. Even before the matches, he talks a lot.”

On the goal scored by Dennis Bergkamp vs. Argentina:

“I’ve seen that play many times and I still can’t find my mistake. In the penalty area, I didn’t make a mistake. Yes, there’s the incredible ball control by him, an incredible finish. In that play, there are many good things which Bergkamp did that no one gives any importance to, they just see a supposed error by me. What I do admit is that I was badly positioned when the ball came because had I been properly placed, I would have fought for the ball without problems.”

He was also asked about being part of the Argentina national team coaching staff:

“Being back with the Argentina national team as an assist with Scaloni is very special for me because I’ve been there since 1993, when Alfio Basile first called me up. I feel very comfortable. You have to make an effort to be here because you leave aside many things to be able to have the prestige that can only be given to you by this shirt. There is nothing more beautiful than putting on the sky blue and white shirt.”