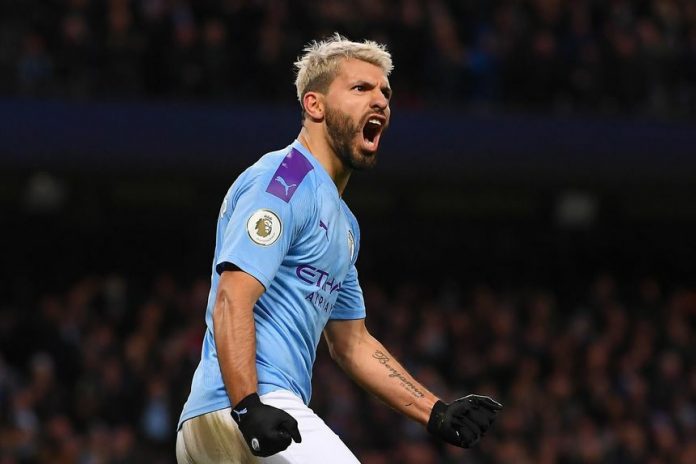 Sergio Aguero gave an interview where he spoke about Lionel Messi, the Champions League, the Ballon d’Or, Manchester City and much more.

There aren’t many trophies the Argentine hasn’t won. The big one still alluding him is Europe’s greatest prize, the Champions League. However, the several time Premier League winner has spoken about playing in England and playing in Spain. Speaking with TyC Sports, here’s what he had to say when talking about the Premier League:

“I got used to not hesitating in the area. Everything has to be done fast. You receive it from behind, you try to turn around and kick it. I’m looking to try and shoot it high and hard so that the goalkeeper doesn’t have much time to react. You have to be very precise or you have to have an extra second to place it but in the Premier League, most goals you have less than a second.”

Aguero spoke about how it is in Spain and England:

“In Spain, every team tries to play and you have a little more space. In the Premier League, there probably isn’t a lot of play but it’s more physical. Except for the top four or five teams, the rest of the teams play very little and jump to defend.

“It’s complicated, even more for me because central defenders are at least 1.90 cm tall. Football has changed a lot and today, even in the national team, you have a normal team and only by running they complicate things. Maybe you don’t need that much quality because if you’re physical, you run and you really want it, any team can complicate things for you.”

He also spoke about calling out Lionel Messi on his goals:

If he scores a goal and I realize that it’s not what he wanted to do, I’m confident enough and I tell him “you didn’t want to do that” because one realizes it. The third goal (Lionel Messi scored for Argentina vs. Ecuador at the 2018 World Cup qualifiers), he chipped it. I saw the replay and he wanted to chip it but I told him “You were lucky. It just went up a bit” and he told me “You know, yes”.

About the Champions League and Ballon d’Or:

“Every player wants to win the Ballon d’Or but the Champions League has a big influence on it. My best year, last year, we won four titles but we didn’t have the luck in that tournament. I wasn’t even nominated in the top 10 and that’s because I need to do more there (in the Champions League).”

About the Argentina national team:

“The first thing is to finish this season, give everything for the upcoming Copa America and after the World Cup. It was at a good time, we were doing well with Scaloni, with a good team. We were enthusiastic, anxious because there’s the chance (of the Copa America) and more that it’s in Argentina.”

If Aguero could be at the 2022 World Cup, he said that he could get there “without any pains”.

About the new players in the Argentina national team:

“The boys adapted quickly. We joked around laughing and it went well. After that, you saw the friendship on the pitch.”

When the Argentina national team loses:

“The first one they criticize is Leo (Messi) but he’s the one that suffers the most. We all suffer when we lose but football is like that.”

“For now, I’m not thinking about what I’ll do. In that regard, every club has problems.”

“I was about a kilo and a half over, I believe it was from 2013 until 2016, I wasn’t able to adapt well to the food. And from then on, I went on the internet, spoke to an Italian doctor and he changed a bit my meals. I told him what I normally ate which was a lot of meat. He told me “try once a week” and I told him “uhhh”. I would see a little meat in the fridge and… After that, I was able to adapt. He told me “when you’re very hungry, have some chicken and rice.” Today, I’m a fan of rice.

“Many said it was because of taking a lot of pills, anti-inflammatories, vitamins. In football, there are a bunch of things to take to recover as quickly as possible. I always took those things and in the end, I think it was because of the weight.”

“When you’ve kicked several penalties, you feel calm. But there comes a moment when there’s a penalty, you don’t know where to kick it because they’ve studied you. It’s been 3 years that I Started to study goalkeepers a bit to see how many times they go on each side.”

Aguero also mentioned that the penalty which had the most pressure was the one he took for Argentina vs. Netherlands in the semi finals of the 2014 World Cup.

About being in the top forwards:

“I think I’m there. Not because I say it but because of the years I’ve had at City with the numbers I’ve had.”

In addition, former Argentina, Liverpool and current Newell’s man Maxi Rodriguez shared his personal experiences with Aguero. Regarding their penalties at the 2014 World Cup:

“He was messed up and so was I. They were very tense moments but everyone kicked brilliantly.”

“He has a million awards, incredible. I don’t know where he puts them. Like Leo (Messi) and his trophies and match balls, they don’t know what to do.

“He’s one of the best number 9’s I have played with. His movements and controls are impressive and it’s for that reason that he’s been among the world’s best strikers for years.

The Manchester City man spoke about a story involving himself and Maxi:

“Maxi is the only one that eats facturas (Argentine pastry) and doesn’t get fat. In Madrid, he invited me to have some mate and facturas. I ate one, because if I eat three, the next day they would weigh me and I’d gain 700 grams. He ate five… And lost weight!