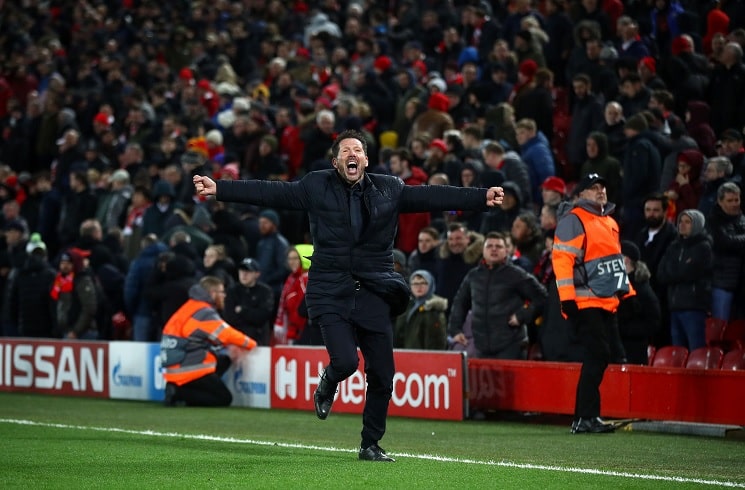 Diego Simeone gave an interview with former Argentina goalkeeper Sergio Goycochea where he spoke about coaching the Argentina national team, compared Lionel Messi and Diego Maradona while also talking about the World Cup and the Champions League.

Simeone has won as a player with the Argentina national team having lifted two Copa America titles while winning a La Liga as Atletico Madrid coach. His team is known for their strong defensive game as well as being mentally strong. Speaking with Goycochea on TyC Sports, here’s what he had to say when being asked about coaching Argentina:

“It was and is my life. Everything is in due time and space. I have no doubt that if at any time the two situations meet (time and space), I may possibly get a chance (to coach the Argentina national team). When the national anthem starts at the Copa America or at the World Cup, I get angry at myself and say “why”?”

“What he’s doing is very good. You could see it on the pitch that they’re looking to continue with a system, you could like it or not but the group looks to be following the plan.”

“One is a goal scoring machine, I have suffered it during the 8 years and I live it every day and the other is Argentine football represented in a person.”

About the Argentina national team not being able to win a trophy:

“When we won the 1991 Copa America, it had been 32 years since we had lost won it. Today, we are going down that path. We have been very close. It’s always a highly criticized group. If you win the World Cup, you are seen as a reference. If you lose, you’re negative, a failure. That you didn’t give it your all. The boys responded very well, even to the circumstances where unfortunately they have had to lose. That side of it is painful. For those living it and for those that have been part of the Argentina national team and not been able to win it. There’s only one winner.”

He also compares the Champions League to the World Cup:

“I relate it to the Champions League. They are tournaments which you can win. How? With proper preparation in terms of emotional aspects, individual aspects. You have to have it and you have to have luck on your side. You can try to look at paths or look for possible solutions but there are details in a tournament that is so short. And you need people with mental strength, it’s not easy. It’s for that reason that the winners keep winning. Germany wins, Brazil wins.”