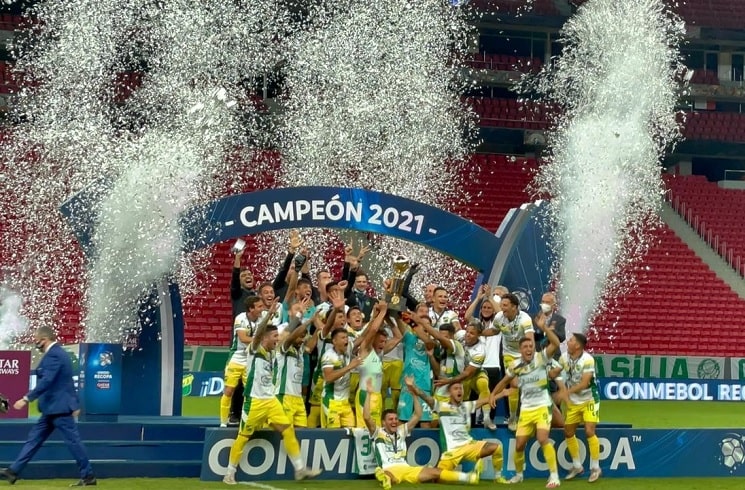 Defensa y Justicia got the 2-1 win on penalties (4-3 on aggregate) vs. Palmeiras with a lot of drama involved in the second leg.

It was Defensa y Justicia, the winners of the Copa Sudamericana up against Palmeiras, the Copa Libertadores winners in the second leg of the Recopa Sudamericana. The first leg ended 2-1 in favor of the Brazilian club.

It was Hernan Crespo, currently managing Sao Paulo in Brazil, who coached Defensa to their first international championship a few months ago. Now the responsibility fell to one of the best coaches in the country, Sebastian Beccacece to lead them to a second one.

The final at the Estadio Norberto Tomaghello in Argentina proved to be a memorable one. A penalty within the 90 minutes, a red card, extra time and more penalties made for constant drama. The defending Copa Libertadores champions would take a 1-0 lead after a foul in the penalty area. Up stepped Raphael Veiga as his penalty went in and the Brazilians had the advantage.

However, just seven minutes later, a lovely through ball would find Pizzini inside the penalty area and it was Braian Romero who was at the end of the pull back to draw Defensa level but they still needed one more goal.

Adonis Frias would bring Matias Vina of Palmeiras down but the Uruguayan would kick Frias in the back as the referee would go to VAR and Palmeiras would be down to 10 men. In the 93rd minute, Benitez with an effort from outside of the penalty area which the goalkeeper would not be able to block and Defensa would get their goal. A 2-1 score in regular time would mean extra time.

Braian Romero would turn from hero to villain. The scorer of the first goal would get himself sent off and Palmeiras would be awarded a penalty kick after getting fouled by the goalkeeper. However, Unsain would make up for his error and save the spot kick. The match would remain at 2-1 and go to penalty kicks.

Both teams would score their first penalty and it was Luiz Adriano who would miss his as Miguel Merentiel would scorehis to give Justicia the 2-1 lead. The next two for each team would be converted with Weverton Pereira da Silva missing his as Defensa y Justicia would be crowned as the 2021 Recopa Sudamericana champions.