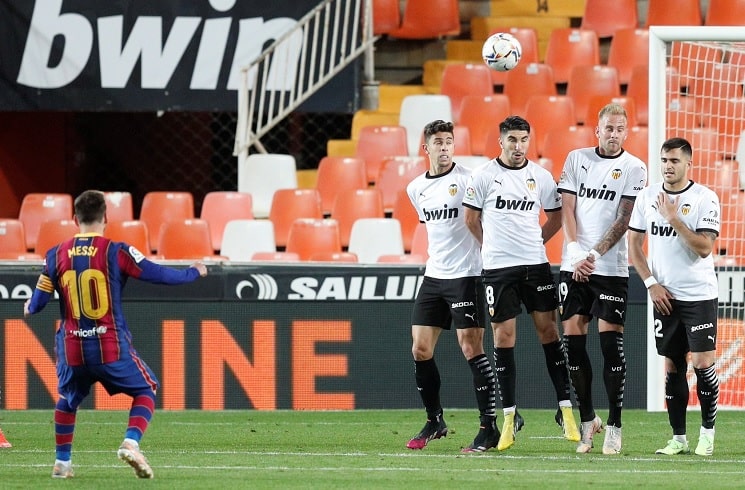 Lionel Messi scored twice in Barcelona’s 3-2 win vs. Valencia to help keep them in the league race.

Messi didn’t have the best of matches but still managed to produce two goals. It was 1-0 Valencia when Barcelona were awarded a penalty kick. A repeat of the 2014 World Cup semi final clash between Argentina and the Netherlands. It was Lionel Messi vs. Jasper Cillessen. At the World Cup, Messi got the better of Cillessen but this time around, it the opposite.

A poor penalty by Messi was saved by the goalkeeper but Busquets would pass it over to Pedri who’s shot would fall to Leo and his second effort would end up as a goal to draw Barcelona level. Barcelona would score a second through Griezmann and take the 2-1 lead.

The Argentine would redeem himself for his earlier penalty mistake, despite scoring the rebound. A free kick for Barcelona and it was Lionel Messi who would take it and his shot would hit the post and into the net for Barcelona’s third of the match. That goal would prove to be the winner. Per Opta, Messi has now scored 50 direct free kick goals for Barcelona in all competitions.

He continues to lead the league in the Pichici race as La Liga’s top goalscorer this season with 28 goals.

50 – Lionel Messi 🇦🇷 has scored his 50th direct free kick goal in all competitions for @FCBarcelona, the first one vs Valencia. Specialist#valenciabarca #LionelMessi pic.twitter.com/QqVKEgkI0I

Messi could create world peace if he wanted to pic.twitter.com/qjC6ybWZ5B