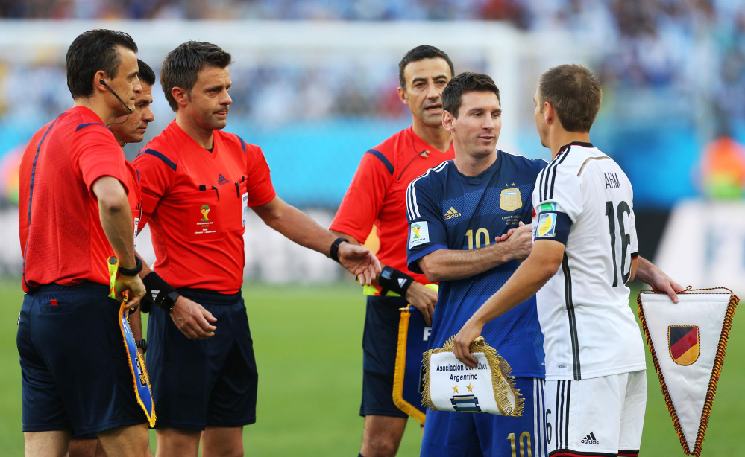 World Cup winning captain with Germany Philipp Lahm spoke with La Nacion in Argentina about who he thinks is the best Argentine, how he thinks Argentina were better than Germany in 2006 and much more.

The Germany legend has nearly won it all throughout his career. From Champions League to league titles to a World Cup, Lahm was a generational player for his country. Having played Lionel Messi several times throughout his career, including two out of three World Cup tournaments, Lahm gave his opinion on his counterpart captain from the 2014 World Cup. Regarding Lionel Messi, here’s what Lahm had to say:

“For me, he’s an incredible player. Maybe the best that has ever existed. He’s an exceptional player but maybe he’s missing that big title with the Argentina national team.

“For the rest, he’s a fantastic player and unstoppable in one on one situations. I have to be honest: I have had a bad day against him.”

About who is the best between Lionel Messi and Diego Maradona:

“Well, to start, for me, I have always been very enthusiastic about Messi. But Maradona too! I would say that Diego Maradona has truly marked an entire generation. And not only in Argentina but in Europe. For that, I would say the best Argentine, when it comes to football, is Maradona.

“But closely right behind him is Messi. And I have mentioned why: Messi has not yet won an important title with the national team, unlike Maradona.”

About winning the World Cup:

“The best thing for a football player is to be crowned world champion. And for that, I have no doubt. If I have to pick one, the best title of my life is that 2014 World Cup. It was an incredible experience.

“And against Argentina, with whom we had played a lot against in previous years. It’s true that we had eliminated them before but they were playing a really good tournament.”

Lahm also spoke about the 2006 World Cup and about playing Argentina:

“The 2006 World Cup was my first one. I was 22 years old and it was a World Cup at home, in Germany. It was an incredible atmosphere.

“We got to the quarter finals at a disadvantage to play Argentina, who were the better of the two teams, with absolute world stars. I remember that Messi was on the bench at the time; Riquelme played and was later substituted but he was an incredible player. They had Crespo in attack… Truly a top team.

“And with maybe a bit of luck, we got to the semifinals but today I say that it was an absolute surprise to advance and finish third in the tournament.

“In contrast, in 2010 it was completely different. We were a young team playing very well together. We beat England in the Round of 16 and faced Argentina again in the quarter finals. That was one of Germany’s best matches at a World Cup: We played incredibly well as a team and we won in sensational fashion 4-0.”

The Germany also had Martin Demichelis as a team mate with Bayern Munich:

“First of all, I appreciate Martin very much as a player. But also as a person. He was a great team mate and you could absolutely trust him, both on and off the pitch. He was a good player and when he went from center back to midfield, he brought new elements to that position: Technical abilities and quick solutions.”

If there was no Lionel Messi, who would be the best Argentine:

“There are some good Argentine players! Someone who people always talk about is Aguero. He left his mark at Manchester City and now he is leaving the club but he has been a symbol and that is clear.

“I’m curious to see where he plays because I think he has one, two or maybe even three more years competing at the top. He is a very interesting player.

“On the other hand, the Champions League is a great measure and a player who last season and this season has shown what he can do is Angel Di Maria. He went back to playing sensationally with Paris Saint-Germain! Unfortunately, once more, it wasn’t enough.