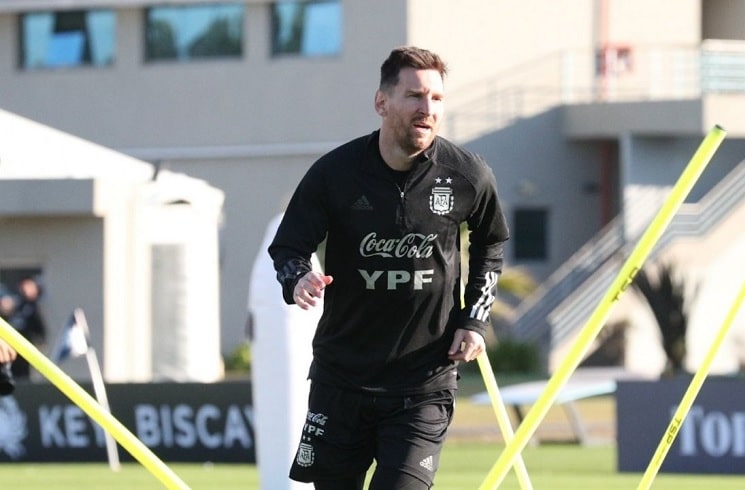 Lionel Scaloni spoke in an interview with Ole regarding the Argentina national team but was also asked several questions regarding Lionel Messi. From how Messi is truly like, to his role on the team to how much of a say he has in the squad.

If you missed it, the first part of the interview can be found by clicking here. Regarding Lionel Messi, here is what Scaloni had to say:

“What I admire about him, beyond how he is as a player, is that those who really know him know how he is and how he thinks. Because he is someone who sells a lot, people create topics about him… Lots of things can be said but honestly, we talk with the coaching staff and at times it’s impressive how naturally he takes it all.

“You have to tip your hat off. Everything that he generated and generates, what he is and what he does, it’s not just because he’s a good player but because of how he is as a person. A question to you…

“How many years has he been at the highest level and how many accomplishments does he have? I don’t know. It’s impressive how he handles things well.

“He’s someone that when he gets home, the entire world wants a photo of him, he always has to have a good face on, to be available and 99% of the time, he is available. You have to value that.

“He is the first one that when you need a hand, he’s there. He always tries to do what the coach asks, in that sense, I have nothing to say. But on a human level, it’s where he has our support because that is where he makes the difference.”

In regards to Messi and how under Scaloni as coach, he is more of a captain than ever, his comments against CONMEBOL at the last Copa America:

“What happened is also because what happened in that semi final vs. Brazil will drive anyone crazy. That game will go down in history and will be recorded. It’s for that reason I said that if they really knew him, they would realize that he is really like that. It just happened that before, there were more experienced players with the role that he has now.

“This happens with steps. When he came to the national team for the first time, there were players with 10 years experience. The times go by and that makes you more of a leader.

“But I assure you that is the one that wants to win the most, the one who hurts the most when he loses, I have no doubt.”

On how Messi looks more comfortable in that role:

“It happens that you feel more and more important. Although we always say that from our point of view and the coaching staff’s perspective, what we want the most is for him to enjoy it, to play football and to be happy.

“And I think that is the radical question. Because when a career is done, be it him or anyone, they’ll be left with moments where they were happy and he made the fans enjoy, After that, only one wins.

“And the ARGENTINE’S know very well that at the end, only one wins the final. Today, football is very competitive and it’s difficult to win. I always said that to enjoy it and to enjoy every training.”

About taking the pressure off Messi:

“It’s not about relieving the pressure because these guys don’t have pressure. Yes, they have a dream of wanting to win with the Argentina national team and to enjoy being here. For us, it’s very important to reach that point, to enjoy the process.

“If you can’t enjoy where you are, you have surely lost something. You’re coming to do well, it’s logical to want to compete but to always try to have things go well, to win, with happiness… And to put aside what could be said or the people that don’t want things to go well for you.

“I believe that Leo, just like his other team mates that are here, they understand that message. And today they are here, they are training and they don’t think all day of if they’re going to play or not, if they don’t win what will happen…”

How his relationship is with Messi:

“We only talk when we really have to. We are never invasive with any player. If there is something that happens, like with this pandemic, we call them to check on them and their families, to know their situation. There, yes, we are close.

“And in Leo’s case a little more because he is the captain, to see how everything is, a trip but not much more than that. But this is something we have been doing with him for a long time:

“Leo has to feel like one more player of the Argentina national team and he shouldn’t decide how or when to travel, or when he has to be next to someone. That is fundamental. He only has to dedicate himself to playing football and that’s it.

Regarding the myth the great players with their coaches and how much of an influence they have on the team and if Leo has ever asked him about how a team should play:

“I, as a coach, speak with De Paul, with Paredes, with Messi, with Lo Celso, with Ocampos, with Nicolas Gonzalez, with Lautaro… I tell them we are going to play like this or like this. This doesn’t mean that a player can say… In Leo’s case it’s impossible.

“If there is one thing that I can say and I can say it openly, it’s that never, never has a player put themselves in the starting eleven. It’s crazy to say that. It’s unfeasible.

“I can say it calmly, in that sense, it is impossible. Every stupid thing that has been said, that it seems like someone would have to go out of their way to say it and if I have to come out myself to defend it, I am going to do it. Because it’s crazy, it’s something that doesn’t make sense.

“He is dedicated to play and to play with his team mates. He has a better understanding with one than with another but because on the pitch, not everyone understand the best in the world. That is normal.

“But now for him to say yes to this or no to that, it’s crazy and it doesn’t make sense.”