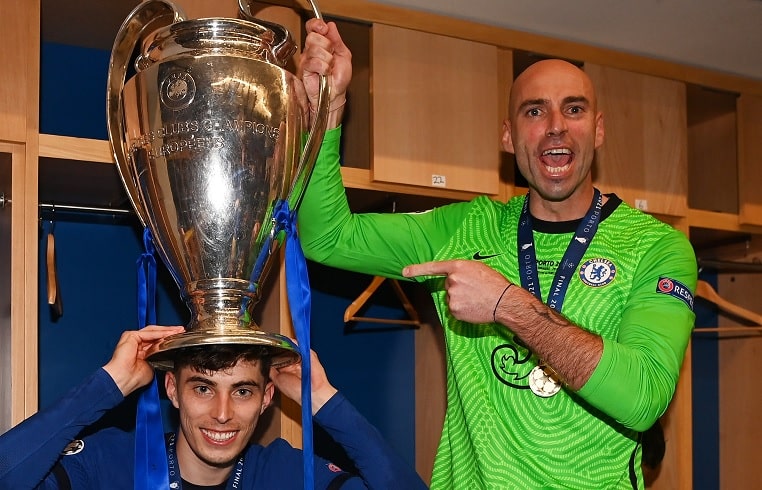 Congratulations to Willy Caballero on winning the Champions League with Chelsea as he becomes the 21st Argentine to win the tournament.

In regards to Argentine players, Caballero is only the fourth Argentine to win the two biggest prizes in club football. He initially won the Copa Libertadores title in 2003 with Boca Juniors.

Walter Samuel completed the Argentine trifecta in 2009-2010 when he won the Champions League with Inter to go along with the 2000 Copa Libertadores title he won with Boca Juniors. Only a select few players in general have managed to win both continental trophies.

In regards to the Champions League, Real Madrid legend Alfredo Di Stefano won the tournament five times in the 1950s with the record holders. Hector Rial also won five wih Madrid while Hector Olsen won it once in 1956-1957, also with Real Madrid. Luis Carniglia coached Real Madrid in 1958 and 1959 when they won the trophy. Rogelio Dominguez was a Real Madrid goalkeeper when he won it three times in 1958, 1959 and 1960 as part of the legendary Madrid teams.

Helenio Herrera was the first Argentine not related to Real Madrid to have won it as he coached Inter to the trophy in 1964 and in 1965, winning it twice.

As mentioned, Juan Pablo Sorin won it with Juventus before former Real Madrid captain won it with two different teams. Redondo won it in 1998 and 2000 with Real Madrid and in 2003 with Milan. Albano Bizzarri was with Madrid when they won it in 1999-2000 while Santiago Solari was with the club in 2001-2002 when they won the trophy. Jose Chamot in 2002-2003 lifted the trophy with Milan.

Lionel Messi first won it in 2006 with Barcelona before winning the treble in 2009, a double in 2011 and another treble in 2015 with the club. Maxi Lopez was also part of that 2005-2006 Barcelona team which won the Champions League.

Carlos Tevez became the first Argentine to win the trophy with an English club in 2008 with Manchester United. Gabriel Milito won it once in his career in 2010-2011 as part of that legendary Barcelona squad.

Javier Zanetti finally got his hands on a trophy that long eluded him when he captained Inter to their first treble in 2010 with Diego Milito, Walter Samuel and Esteban Cambiasso also in the team.

Another Javier, but this time Mascherano became the 20th Argentine to win it in 2010-2011 and once more in 2014-2015 when Barcelona won the treble. Angel Di Maria put on a man of the match performance in 2014 he won it with Real Madrid.

And finally, Willy Caballero joined the list on May 29 as he was part of the Chelsea squad which defeated Manchester City.

Congratulations to Willy Cabellero on the win!