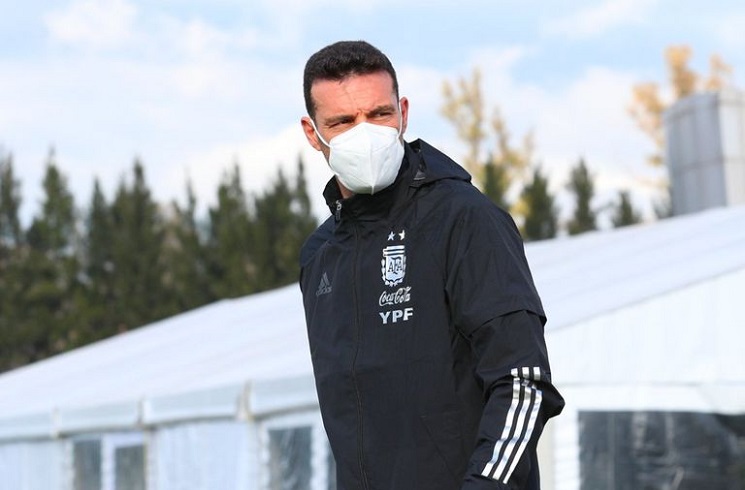 Argentina national team coach Lionel Scaloni spoke at a press conference on Monday where he commented on the team, the match vs. Colombia, the Copa America and the players in the squad.

Lionel Scaloni will try to keep his team in second place in the South American World Cup qualifiers when his team plays Colombia on Tursday. Never an easy opponent, Scaloni has a few players back and a few that will miss the match. In regards to the match itself and how they will try to mark Lionel Messi, here’s what Scaloni had to say:

“We have to create many more chances, on a defensive level, I don’t think we’re suffering. Tomorrow is going to be a match totally different, where you have to take more precautions but I don’t think it’s because of the characteristics of the central midfielder. We’re backing Leandro (Paredes), we also have other options but I don’t believe the problem is in that position.

“We have to do better, to be more concentrated in front of goal, that the team creates a lot more. We finished the match vs. Chile with three or four forwards and that doesn’t guarantee us goals. We have to occupy the spaces well and know where to attack the opponent.

“Messi’s always marked by two or three people. We are planning on doing something which we have not been doing in the last games. Hopefully we can do it. We will have to see what Colombia does. They are the hosts, they just won in a convincing fashion and we will see if they have the same team. Messi being marked is something that we assume.”

In regards to the younger players on the team:

“They are players who transmit a lot of enthusiasm, they can give us things and they’re playing well. The idea is for them to grow, that if they have to play at the Copa America, they’ll play and for the future, it’s a lot better.”

“Aguero only trained one day with the team. He’s only had one training session, he’s well, logically, he is missing rhythm and he will get that little by little in the training sessions. He will have to improve his condition but for us, he’s still an option and we are happy that he is with the group because he contributes, he gets along well with everyone and that is very important to us.

“Franco’s case hurts me a lot. We know that he’s not contagious and that he played with his team a few days ago and there were no problems with him. The truth is that it’s a difficult situation for him because he wants to be with the group.

“The worst thing for a player is to not be able to accompany his team mates and that is what hurts us. We don’t know when he will be ready to play. It’s a problem because having a player but not knowing when he will be available is difficult and for him, in his head, it’s not good either. Hopefully it’s resolved soon because we need him with the group.

“In Lucas Alario’s case, he is trying to recover. In this training session, the first impressions were good and the last few days, not as much. We will wait, he’s an important player for us.”

The coach also commented on the Copa America and Argentina being based in Ezeiza:

“We know what everyone knows. That for now, it’s going to be played. The group is aware of that and nothing more. There’s not much to add.

“Having a base in Ezeiza during the Copa America will be important, it brings us tranquility. We’re much calmer in the decision of being at home but the worrying aspect is still there.”