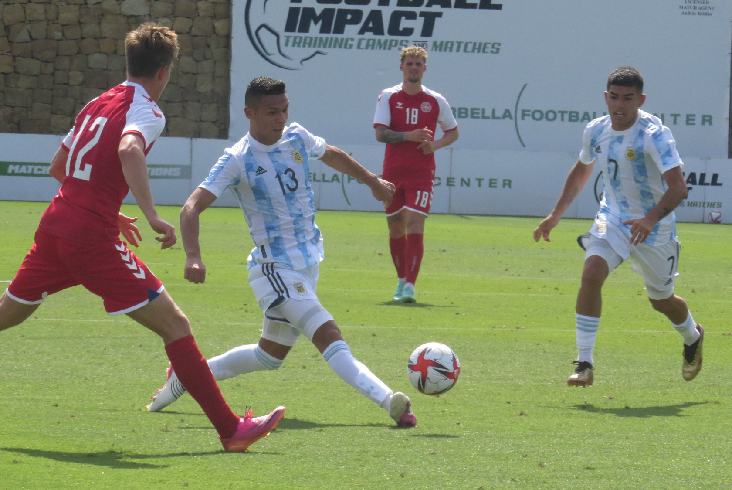 The Argentina U23 team started off the week with one win out of one as they play Saudi Arabia on Sunday.

Coach Fernando Batista fielded a different team from the one which played Japan earlier in the year. Experimenting ahead of the Olympics in August, Argentina created several chances in both the first and second half but were unable to convert. A one on one chance and a strike off the post all occured prior to Denmark’s goal.

It was 1-0 Denmark and Batista began making changes. Three substitutes as Fausto Vera was on for Tomas Belmonte, Pedro De La Vega for Fernando Valenzuela and Francisco Ortega for Claudio Bravo.

Batista made four more changes after that. Esequiel Barco for Agustin Urzi, Adolfo Gaich for Ezequiel Ponce and Santiago Colombatto for Martin Payero. The fourth change was minutes after as Leonel Mosevich was on for Nehuen Perez.

Adolfo Gaich would make a difference as a run inside the penalty area in the 90th minute would see the goalkeeper foul Gaich and Argentina were awarded a penalty. Barco would step up and score his as Argentina would draw level.

There would still be one more change in the script. A cross into the penalty area found Fausto Vera as he would head the ball and give Argentina the 2-1 lead in the 94th minute.

Argentina U23’s have just fallen behind against Denmark’s U20/21 side in Marbella. pic.twitter.com/VABuhuWJf3

Ezequiel Barco levelled it up in injury time with this penalty, and in the 94th minute, Argentinos Juniors’ Fausto Vera won it with a good header!

Crazy end to the game. pic.twitter.com/btcA1OgY47