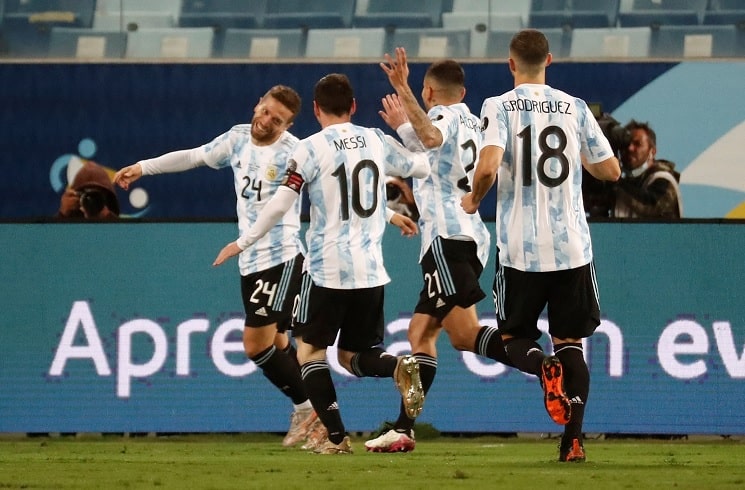 Lionel Messi scored twice for Argentina in their 4-1 win vs. Bolivia.

It was the Lionel Messi show as he had two goals and one assists in a changed looking Argentina starting eleven. The first half saw three goals with the first one coming from Papu Gomez.

Angel Correa receive the ball and drove towards the middle playing a pass onto Messi. He would play a chip over the Bolivian back line onto Papu Gomez who would strike the ball to give Argentina the 1-0 lead.

Papu Gomez would play a role in the second goal as he was tripped up inside the penalty area and the referee would award a penalty kick. Up stepped Messi and he would score as he placed the ball to the side of the net.

Messi wasn’t done just yet. Sergio Aguero would play a dink pass and Messi would time his run perfectly and a first time finish by Messi as he would chip the goalkeeper for his second, Argentina’s third of the match. He has now scored 75 goals and is the most capped player ever for Argentina on 148 matches

The second half would see Bolivia pull one back as Lisandro Martinez over committed and was caught out of position. A low pass into the penalty area and the strike would beat Franco Armani.

Lautaro Martinez would replace Sergio Aguero in the second half and find the back of the net. Messi would start the play as he would pass the ball wide to Acuna. His pass into the penalty area would find Julian Alvarez as his effort was blocked. The loose ball would fall to Lautaro and he would score from close range to give Argentina the 4-1 lead.

Lionel Scaloni would make several changes. The first one saw Julian Alvarez on for Papu Gomez early in the second half. After that was a double substitution as Lautaro Martinez was brought on for Aguero and Gio Lo Celso for Angel Correa. Scaloni would make two more, five in total as Leandro Paredes was substituted on for Guido Rodriguez and Nicolas Dominguez for Exequiel Palacios.

Argentina top their first and will play Ecuador on Saturday in one of the quarter finals of the Copa America.