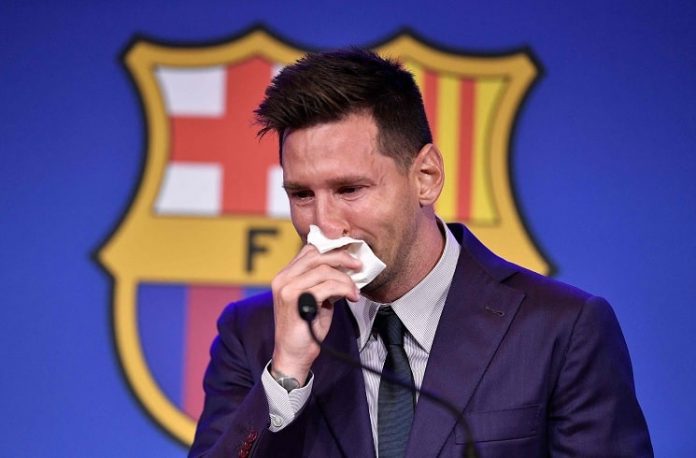 A very emotional Lionel Messi gave a press conference on Sunday where he spoke about him leaving Barcelona.

Lionel Messi did not get the ending he deserved at Barcelona. No Camp Nou chanting his name, no final match in front of a crowd. Instead, it was a press conference with a few journalists, family and team mates.

The club’s greatest ever player has left and speaking with tears in his eyes, here are some snippets of what Messi had to say:

Messi was asked about the possibility of him joining PSG:

On if this is the most difficult moment of his career:

“I’m very sad, I did not want to leave this club because it’s the club that I love.”

He was also asked about the picture of himself alongside Angel Di Maria, Leandro Paredes, Neymar and Marco Veratti in Ibiza from a few days ago:

“Yeah, completely (coincidence). I met them in Ibiza, we got together one day, we are friends. He (Neymar) called me and said I’m in Ibiza, we’ll get together… And there was a joke at the time, come to Paris. But it was a joke.”

And finally, Messi commented on the trophies won while revealing that he agreed to lower his salary:

“I would have liked to have won another Champions League. We got eliminated in the semi finals vs. Liverpool. We got to a semi final with Pep. […] I’m of the opinion that we could have gotten one more. I have achieved my objectives.

“I offered to reduce my contract by 50% and they asked for nothing else. The news of me asking 30% more is a lie. A lot of what people are saying are not true.”