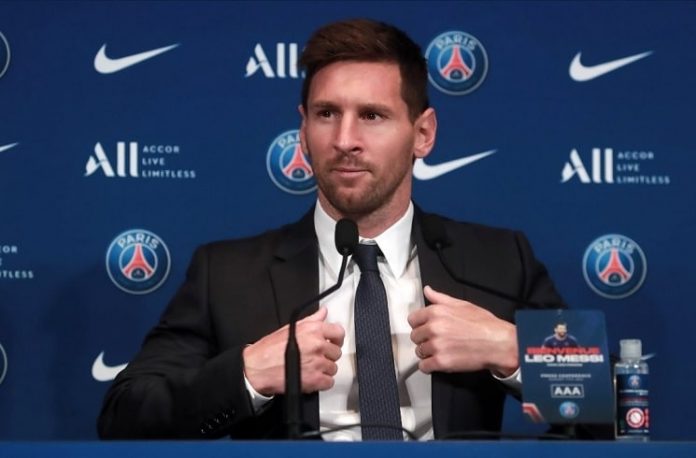 Messi gave his first ever press conference representing a team that wasn’t one of the Argentina national team or FC Barcelona. One of the, if not the biggest transfer in recent times, Messi signed with Paris Saint-Germain on Tuesday and made it clear that his objective is to win the Champions League.

Here is what Messi had to say:

“I am very happy to be here, although it was very difficult to leave Barcelona. Once the Barcelona statement came out, Leonardo and the team got in touch with me.”

In addition, Messi revealed what his ambitions are at the club:

“I come to help with a lot of motivation and with more desire than ever. From the outside you can see a strong group, a united group. Neymar and I know each other very well. I hope we will be stronger together and with all our teammates.

“I have friends, people I know in the locker room. Looking at the team, you have to get excited and see that the possibilities are there to achieve the goal that you want.

“I have the same excitement, and the same desire that I had as a child.”

“The coaching staff and the squad had a lot to do with me choosing this club. I know the coach Mauricio Pochettino very well. The fact that he is Argentinian helped from the start, it was important in my decision making. The first thing I did was talk to Pochettino, obviously we talk, we’ve known each other for a long time.”

On when he will play his first match for PSG:

“I will have to do preseason alone, and I hope to be able to play as soon as possible. My only will now is to begin the training sessions. I want to work with the staff and team-mates and begin this new moment of my life.

“I have this will to play. I am really impatient. I still want to win, as I did the first moment of my career.”

On the possible of playing vs. Barcelona:

“I don’t know if we’re going to face Barça. On the one hand it will be nice to go back to Barcelona, ​​hopefully with fans in the stadium. It would be very strange to play at home in Barcelona with another shirt.

“I will always be grateful for the affection of Barcelona fans, it’s my home. They know that I like to win and it would come to a competitive team.”

He was also asked about playing alongside Neymar and Mbappe:

“It’s really crazy and I’m happy about that. Sharing the day to day life with them and all the squad. Really there are some amazing transfers here and the team is incredible. I’m going to be playing with the best players.

“Neymar, Di Maria and Leandro Paredes had a lot of influence on me joining Paris Saint-Germain. Neymar was one of the reasons for me choosing Paris.”

On the reception his received:

“The welcome I received was wonderful. I feel incredibly happy. I can’t wait to get started with my teammates. Hopefully it will be an extraordinary year for the fans and the team.”