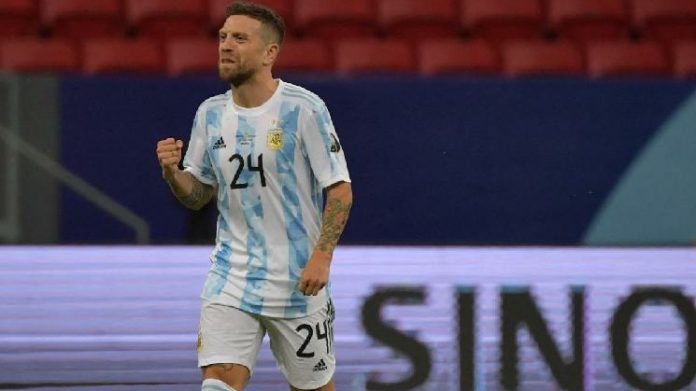 Alejandro Papu Gomez was part of the Argentina national team which lifted the Copa America trophy last month and he spoke about it all.

Already 33 years old, Papu Gomez has not played many matches for the Argentina national team. However, he did take part in the Copa America when the team lifted the trophy and he even scored two goals. Having spent most of his career in Italy, Papu also commented on the Italian national team and how Argentina are up to par. Speaking in an interview with Ole, here is what he had to say about what it means to win the Copa America:

“Ouff. I think I still can’t describe it. Or I haven’t realized it yet, ha. Only a few weeks have passed and I still find it difficult to process. Maybe once a few years pass we will realize what it is to win a title with the Argentina national team.

“It happened to those who won important titles in the past… And it will continue to happen because people still remember the 1978 World Cup, the 1986 one and the Copas America.

“For that reason I think we will realize it once the years go by, maybe when we stop playing…”

Against Brazil, at the Maracana. What it generated…

“Tremendous! It was all very epic, with the pandemic, everything changed. We had to go to Brazil once more, with everything that happened at the 2019 Copa with the referees… We had doubts but they were all extra little things that gave us strength to dig deep inside us, things that we had saved.

“After that, the rest, are just things on social media, nothing happened. It’s obvious it hurt them but I didn’t see Dani Alves doing that. Maybe this guy, Richarlison, at 23 and he is young… And that’s perfect, eh. It’s a game but the truth is seen on the pitch.

“On social media, you can say anything but after that you have to back it up on the pitch…

“It’s clear that the next matches against Brazil are going to be nice, hehe. It was always a clasico but now they are hurt…”

How Neymar had a different attitude:

“Ney and Leo really have an incredible relationship and Lea (Paredes) also gets along with him very well. It didn’t seem unreasonable to me that they got together after the match at the Maracana. What happens is that seeing it as Argentines, if it was the other way around, the way we are…

“Anyway, I am 100% sure that it would not have happened because knowing Leo a little, he wouldn’t have given that to the press or had a photographer take that photo. Leo would have gone to the locker room.

“It happens that the Brazilians are different, they take things with a different sense of humor. Surely there are those who hurt more and those who hurt less but I have no doubt that Ney wanted to win the Copa like everything else. But he was happy because Leo is his friend and as Ronaldinho said too.

“Also, Ney was unstoppable in the final, if you didn’t kick him two or three times, you couldn’t stop him.”

At what point did they realize they could win it

“The main objective was to always try and play six matches and we had it in our minds to win but from the first day there was a different atmosphere, it was positive in all of the players, there was a very good group and if someone didn’t play, he supported the other.

“After that, as the matches went by, we realized that the team was solid and that we could beat anyone.”

About how those who didn’t play were still invested in the team:

“It’s difficult to be in a national team. For the coach it’s surely difficult to pick 28 players and from those, to select 11 of them… We are talking about Argentina, one of the best national teams in the world, with players that are stars in their clubs.

“Then being in the group and each one has to put their ego aside and put itself at the disposal of the team.

“Personally, I had to be on the bench, warm up for 45 minutes and not enter or not even be selected for the bench and that hurts because you always want to play, you want to go in and contribute something…

“Then I got to play and that is the good part because I could show that I was up to it. There you realize that the group and everyone personally, had the mentality of wanting to do things well to win and not to play and to score. We all wanted the team to win.”

“Mother fu…., look at how he’s training, look at his desire.”

“It was like that. The one who did not get selected to play, trained more than the one who played and that made it so no one would relax, that no one would be in a comfort zone of “I’m a starter”. The competitiveness of a group makes it a better team.”

“I think ever since he got there, together with Aimar, Samuel and Ayala, they are doing things well. There’s been a big change and he’s a coach that showed that he who is well, play.”

Gomez was asked about the World Cup

“I know Italy because I played in that league for 10 years and I know every player of that national team and I watched the Euro matches. I don’t believe that Argentina are at an inferior level to the Italian team that won the Euro.

“It’s true there are other strong national teams as well, that the European teams are very complicated and have a high rhythm. I saw the Euro’s and I saw the Copa America, it’s as if they are going at a (speed) of a thousand.

“I don’t know if it’s because of the pitches that they are faster… Anyway, today, Argentina is not less than Italy and I think we can have a great tournament at Qatar. Then, it’s a few things. You’re missing luck and you have to give your all. It’s a month where you have to give it everything but I believe we are well.”

“I believe Messi is in another step in his life. He’s 34, he’s a very mature person and he sees football and his profession from another side. Also, in the past two years, he has had to live and share moments, locker rooms and squads with different people, that are courageous and more rebellious.

“I don’t know how to explain it but for example, I am very similar to De Paul. We grew up in Sarandi, we like the same things, the same streets… I look at him and I know what he is thinking. And that happens with a lot: Otamendi, Paredes, the guys from Rosario, the kids from River…

“So we have a special chemistry that makes it that the call-ups are much better, that in the face of adversity, we recover in the best way or we kill ourselves for the guy next to us.”

And how Leo fits in all of that:

“Leo is a normal person. I’m a joker every day, I make jokes and he starts to laugh, he likes it but different…

How it must be like that to be Messi:

“In my case, we are of the same generation, we’re the same age, we both have three kids… We have a lot of things in common. After that, it’s a question of how everyone is. In my case, I spend all day on Youtube and 90% of the things are Leo because my kids just watches his goals. But when we are there, with the team, we are no longer with Messi, we are with Leo.

“And we talk about private things, about family and that’s nice. And he is a super simple person, super humble, who will never get out of hand. But that doesn’t mean he doesn’t like to joke around. And it’s normal that at times people and even us sometimes, we see him in a special way but he is the most normal person in the world. There’s not much else to explain.”

“The truth is that, yes. For Leo but also for Ota (Nicolas Otamendi), for Kun (Sergio Aguero), for Di Maria, for all the guys that lost a final and it went badly.

“He’s already 34 years old, hopefully he plays with the national team until he’s 40 but there aren’t many tournaments left and we wanted him to win a trophy with the senior team.”