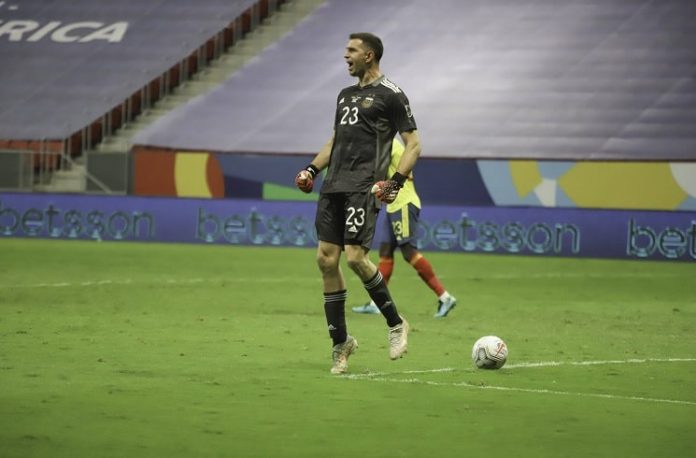 Emiliano Martinez gave an interview where he spoke about working with a psychologist, Lionel Messi and the Argentina national team.

“Celebrating after stopping a penalty or talking to the opponents, that’s not the example I want to give the young kids. But it was what happened at that moment. In an athlete, behind every success story is a lot of effort and sacrifice.

“I had to overcome a lot of adversity before getting to where I am now. That’s the message I want to give to the youth, not a meme or a celebration.”

He also commented about working with a psychologist:

“Playing with the Argentina national team was a dream of mine since I started stopping shots at the age of six. I was always strong but I work with a psychologist. It changed me a lot. It prepares me for every match. We talk two or three times a week. My head is more focused than ever, win or lose. I have three preparations. Mental, individual and that of the team.”

“I’m more happy for him than for me. He behaves like just another team mate and a crazy captain.

“Before the match, he will give us a talk explaining to use about the weaknesses of the opponents and what we have to do. After that, he asks that we all sing the national anthem together. Details like that make us more enthusiastic. And there’s the obvious, he’s a total reference point in the play.

“The message, nevertheless, was not give the ball to the number ten. It was to work for the ten. If we have to run 12 km per match, we will run. But we can’t pass him the ball and hope that he fixes everything. In that structure, the idea is to give your life for him. And everyone who plays understands that.”

Regarding the match against Brazil on Sunday:

“It will be nice playing them again. The important thing is to continue collecting points in these qualifiers to be able to qualify for the World Cup.”