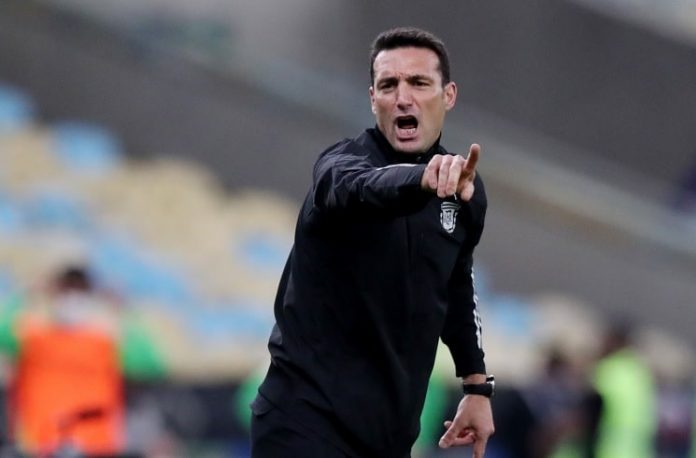 Lionel Scaloni has won the Copa America and Argentina are well on their way to qualify for the 2022 World Cup. However, with World Cup qualifiers in October, both Exequiel Palacios and Paulo Dybala are injured but have been called up to the squad. Speaking in an interview with TyC Sports, here is what he had to say:

“They have to be at the minimum conditions to come and for me, I like that.”

“Everyone knows we would like to play against the best, there’s no doubt. For one reason or another, recently, the last team we played against a European team was Germany, which was a very good test and positive in any aspect.

“Facing top level teams before the World Cup is important. Hopefully it is made official and that it can be played because it interests us.”

About the Premier League players being called up to the national team for the October World Cup qualifiers:

“Yes, they are sure, no doubts. The first time is happened to us, we didn’t know where to look.”

On the image of Lionel Messi behind the PSG wall as they defended a free kick:

“It implies that you want to win. It will be what it will be, if he has to shoot or go to the post. He is a born winner and he will do what it takes for the team to win.

“The reality of it is seeing him like that, all it does is magnify what he is. Beyond being the best of all, he is going to leave a legacy to all of these kids. The most important thing is that he wants to keep winning.”

His hug with Lionel Messi after the Copa America:

“The intention was to stay on the side of the pitch with the staff but the emotion took over and I was facing him. What he generates has so much of an impact, the happiness was doubled.

“To see him happy was to see an entire country happy. We had some particularly ugly situations during the Copa, he knew it but in the end, it happened. There are personal things that happened with the family. It’s a hug with a little joy, a mountain of things. It will remain forever.”

“A team that has Messi has to have good players next to him. You can’t have 10 players that only want the ball and not one of them be vertical about it. We have them and have decided that is the best option. You can’t always have the initiative for 90 minutes. City owned the game but the team that was more forceful won it.

“With me, Leo will always play and when he doesn’t, it’s because I don’t see him in the best conditions. In that, we have no problem. It’s obvious that there are moments but everything is spoken about. I’m of the idea that he always has to be there, he is untouchable. We respect ourselves and that is the most important.

“At some point, I thought I had to go to the bench against Paraguay but I decided to let him play. To risk a player for 35 minutes, I prefer to take him out from the start.”

“I saw it well, a good match from PSG, Leo played a good match and scored a great goal. We are happy for that. We are always in contact. The information was that he needed a few days to recover and yesterday he played normally. We didn’t end up talking after the match. He finished well and that’s the most important thing.”

About the number five on the team:

“It’s been a while since we played with a five in front of the back line. We might see it in some games but lately we are not doing it. Even in some matches, neither Leandro Paredes or Guido Rodriguez can play. It’s not that we do not use it but that we do not need it.”

What he told Angel Di Maria after the 2018 World Cup:

“When the 2018 World Cup finished, I had a relation with most of the players and what I told him was that he didn’t have to step down from the Argentina national team. Many decided to publicly announce that they would not be continuing.

“I told him many emotional things because it’s what I felt and because when I speak, I don’t lie. That is something the players know very clearly. He still has something to give the team.

“The important thing is that he feels important and to have that feeling of freedom of being able to go to the pitch, do a nutmeg or a dribble, something that does greatly. That he went back to have and for us it’s important.”

Regarding the match against Brazil:

“Those who acted normally were us. I picked the team, no one told me that they couldn’t play. CONMEBOL endorsed it until the last moment that they could play. It smelled bad from the start.”

Sergio Aguero and the number nine spot with Argentina:

“We had a chat today with the coaching staff. It’s an important moment for him and for all the players. We need him well and to have some form. He’s a player that we like, that has always been there.

“But it’s obvious that we need him to be playing and he has some problems. Now he is training, hopefully he plays and oputs me in a tight spot. Now Dybala is injured and it hurts us because we want them to be well.”

“We didn’t know everything that he was going to do during the penalties. It was something new but beyond what he did, he stopped all the penalties. It’s part of his personality, we look purely at the sporting aspect. Today, he is at a good level. If he continues like this, there are no problems and if not, there are his team mates that are contributing.

“He plays psychologically, it shouldn’t be easy, I never found myself in that situation. The nerves play and he was very calm.”

About the national team:

“Today, no national team in the world would dare say that they are favorites for something, not even France. Today, we can compete as equals. Great teams in the World Cup fell and after would go on and win, like Italy in 2006 and 2018 with France.”

Why he always changes the team:

“It interests me that everyone trains hard and thinking that anyone can play. I think that not every match is the same. In some, you may need a different type of a winger or a different midfield.

“You cannot always play the same way and with the same players. They understand that the team did not lose its essence. The level is very even, it would be very unfair to say that I have a starting eleven. I respect those who don’t understand it but it has to be. Today, only Messi is for sure.”