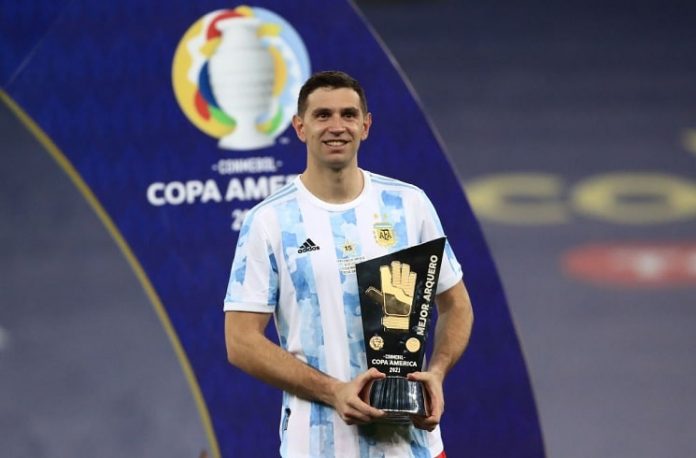 Emiliano Martinez spoke about playing video games with his team mates from the Argentina national team and how he prepared for the Copa America final.

“Before the final against Brazil, I played a few matches of Call of Duty to relax.

“In a lead up to a World Cup qualifier, we were 10 in one place playing Among Us. Until two in the morning we were playing with everyone. We trained in the afternoon and the truth is that we had a lot of fun.

“From there game the group from the Argentina national team, because we are united, we play cards, Among Us together, Call of Duty. There are some guys that play FIFA, like Lisandro and Cuti and they have tournaments or play ping pong. The group became more and more united and basically through the games.”

He also revealed that he has a phrase he says when he does play:

“From my group of friends, I’m the one that goes to war, the assassin. In place of “Look how I’m going to eat you” from the penalties, here I say “Look how I will shoot you a bazookazo”, he. I walk with a bazooka everywhere.

“I like it. Football aside, when I get home, I’m with the family and after that at night I have my video game spot to connect with my team mates from Mar del Plata. And the truth is I like it.”

In addition, he also spoke about how he started playing video games:

“Ever since I was a kid, I always liked things related to (video) games. When I lived in Mar del Plata, I would play with the ball during the day and at night, Playstation, Sega or Nintendo. Today, during the day, I play Mario Kart with my son and with my Argentine friends, we play Call of Duty. We are sick. There are four of us and we play every night as a squad, always.