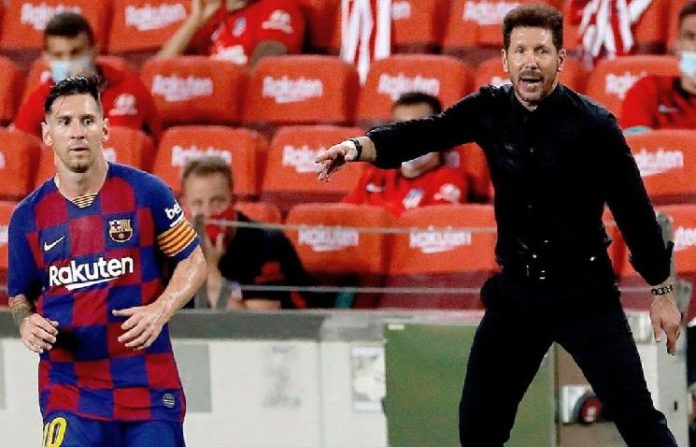 Diego Simeone spoke about Lionel Messi with the Argentina national team, winning the Copa America and coaching him.

Simeone is regarded as one of the best coaches in the world. He has coached Atletico Madrid to more than one league title along with other domestic and continental trophies. However, he has always come up against Lionel Messi, he has never coached him. Speaking in an interview with Ole, Simeone spoke about what he thinks about Messi with the current Argentina national team and if the players were finally able to play with Messi and not be fans:

“I truly believe it’s difficult to tell from the outside, we can give our opinion on what we see but a lot of the things what’s happening on the inside is different. And the truth is, they know.

“But what is seen from the outside is that, Leo’s personality, his presence, is more visible. And in every factor. It was always visible for what he represented. But ever since this cycle started with Scaloni, he’s started to walk. There is a Leo who is seen as everyone always wanted to see him.

“He had his time to get to this moment. I don’t know how it’s handled on the inside but it’s what you see from the outside.”

In regards to Lionel Messi as a player:

“I never got to train Messi but knowing him very little, with the very little talks I have had with him, what I would say is that he wants to win. He wants to win… All of the expectations that are generated and the illusion of winning, it’s thrown to him because he is a winner. It’s not that he wants to play a different way. That’s a lie.

“He is the first that wants to win. And that was represented clearly in this Copa America.”

A Copa America champion himself, Simeone commented on Lionel Messi winning the Copa America with Argentina and if it was a relief:

“There is no doubt that he took the knife out (from his back) by winning the Copa America. That he won a thousand Champions Leagues, a thousand leagues, that he has 200 million goals, that he has a Ballon d’Or and he couldn’t win with Argentina!

“It was incredible but life at times ends up giving you things a little later and well, you have to accept it like it is. What I have always valued about him is that he never gave up, he never shied away from his place as a protagonist to get angry with the world, to say I’m not going anymore, I’m walking away.

About how he never got to coach Lionel Messi:

“I’ll tell you a detail that happened when that happened with him at Barcelona. We called Luis (Suarez), with all the respect, to ask him how Messi was, if he was anxious, to see if there was even the smallest possibility, imagining that he could come to Atletico de Madrid.

“I mean, I didn’t call Leo but Luis. But the situation lasted three hours because PSG already, obviously, was obsessed with him. The truth is that it never happened for us to meet. He was always with Barcelona and us with Atletico, in the time that he has been with the national team, I wasn’t… But I insist, he transmits this to me: He wants to win. I have no doubt that Messi has to play in a team that knows what it has to do to win. What kind of play? It doesn’t matter, that’s a lie, he plays for a team that wants to win and is prepared to win. Don’t think about him, think about the team.”