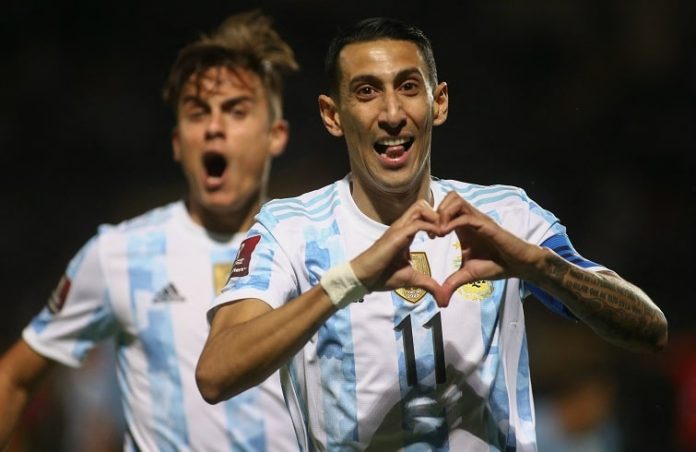 Angel Di Maria with a great goal for Argentina in their 1-0 win vs. Uruguay in the World Cup qualifiers.

Di Maria scored early in the match and that was the goal that Argentina needed. Emiliano Martinez kept the score at 0-0 as Uruguay had a great chance from close range but Martinez with the save. Paulo Dybala won the ball in midfield and played a pass to Di Maria as he curled a shot from the edge of the inside of the penalty area into the side of the net which gave Argentina the 1-0 lead.

The rest of the first half saw Uruguay creating many chances with Argentina misplacing many passes.

Argentina national team coach Lionel Scaloni would make one change as Joaquin Correa was brought in for Paulo Dybala. Scaloni would make two more changes as Angel Correa was brought in for Angel Di Maria and Alejandro Papu Gomez for Lautero Martinez. Joaquin Correa had a great opportunity to score as Molina played a pass into the penalty area but Correa’s weak effort was saved.

Lionel Messi would play and was substituted in for Gio Lo Celso as he would play 15 minutes. Scaloni would bring in one more play as Exequiel Palacios replaced Rodrigo De Paul.