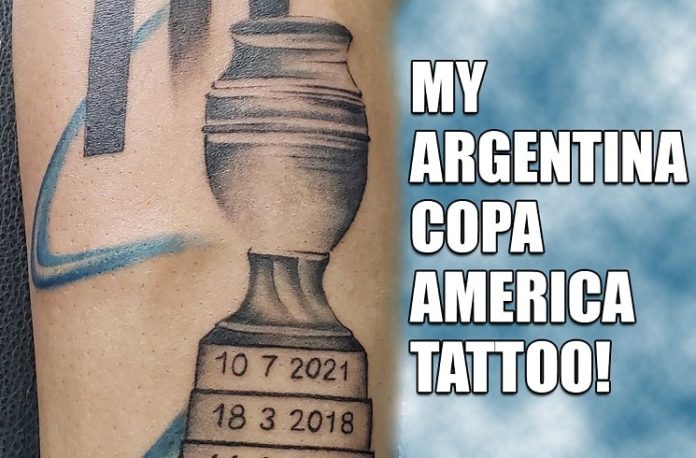 It’s a rare post not related to news but one I thought I would share with the Mundo Albiceleste family.

As you know, 2021 was a very special year for all Argentina fans around the world. We finally got to witness our team win the Copa America and we celebrated for days, weeks and for some, maybe even still celebrating!

I had tweeted out prior to the Copa America that if Argentina would win the tournament, I would tattoo the name of the player who scored the winning goal. While it was Angel Di Maria who scored and while I did get a tattoo, I decided to change ideas.

The tattoo I got has three different aspects. The Copa America trophy, four dates and the big number 10 behind them all. The dates are the following:

The first dates I don’t believe I have to explain. The second and third dates are the dates where I watched Lionel Messi with FC Barcelona. He scored three goals in two matches when I watched him against Athletic Bilbao and Chelsea live in the stadium.

And finally the date in June 2012 was the date of Argentina against Brazil where Argentina won 4-3 with Lionel Messi scoring three goals. I was at the stadium for that match and it truly was a match for the ages!

If you guys here have any or are thinking of getting any Argentina related tattoo’s, leave a comment! Maybe we can all get inspired for one if Argentina win the World Cup next year!

I said if Argentina would win, I would get a Copa America tattoo. Four very special dates on the trophy, three of which I was fortunate to watch Argentina, Barcelona and Lionel Messi live. The number 10 speaks for itself. pic.twitter.com/OJNAPUJsBR