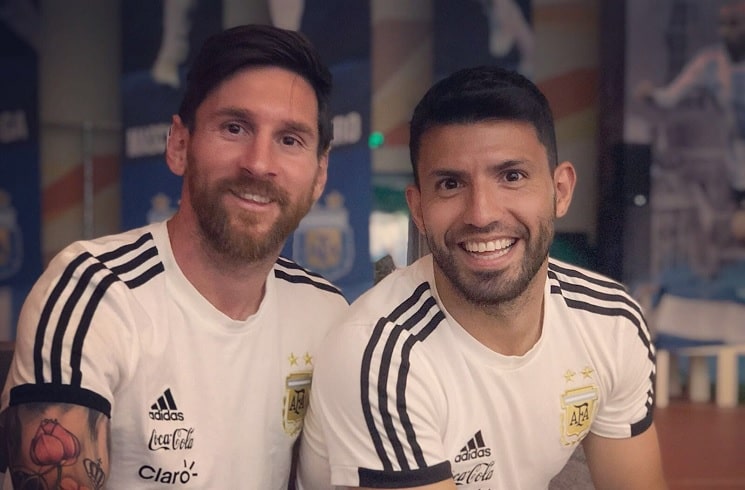 Sergio Agüero played alongside Lionel Messi for several years with the Argentina national team and spoke about the world’s best player while I also speaking about Argentina at the World Cup, his forced retirement and a statue at Manchester City.

Agüero won an U20 World Cup, an Olympic gold medal and a Copa America with Lionel Messi and the Argentina national team. As we translated, he spoke in an interview on Monday about winning the Copa America and he confirmed that he will be joining the Argentina national team for the 2022 Qatar World Cup. In the same interview, Agüero spoke about Lionel Messi. Here is what he had to say:

“As long as he continues to play, you can ask anyone who has seen him in person, training and playing, it’s crazy how easy he does things that costs us a little more to do. In the 15 years I played in Europe, I haven’t seen anything like him, not even close.

“When we played in reduced spaces, we already knew that if Leo wanted, in two minutes he would score five goals on us. He would take it and boom, goal. We would try to get him to score only three goals but we knew that if he woke up for two minutes, it was impossible for us to win one of those games. That means that we are at six points and he is at ten, four points ahead.

Regarding Argentina at the World Cup:

“Obviously the candidates are always the same: Germany, France and Spain. I believe that today, Argentina are much more confident than before, so be careful. If they continue like this as a group, the World Cup could be very interesting. The draw is always key but in the end, you play everyone.”

In regards to his forced retirement from football:

“From time to time, the idea of coming back come to mind but obviously I know that it’s a no. It’s like looking at something you know won’t happen, at least for a while.

“I thought that I had two years left at the highest level and after that I would have to to see where I would play the two years to retire after that. When I got the offer from Barcelona, I didn’t doubt it.

“I imagined playing with Leo to be able to reach the World Cup in good shape. What happened to my heart was very strange and sudden. They don’t really know why it happened, I’m going to keep investigating just to find out the truth. There is always the question of whether it was because of COVID-19 or because of the vaccine. I was fine physically, something strange happened.

“It also happened to me during a training session. I was already feeling bad. One thought that it was because I had gone back to training but it’s strange because I was at the Copa America. I felt muscular pain and my heart hurt a lot and I had a lot of pressure.

“Today, I want to play but it scares me. I trained my entire life to the maximum and at a high level. They told me I was lucky because I easily could have had a heart attack.”

He also spoke about his Manchester City statue:

I still don’t know for sure but I heard the rumor. May 13 will mark 10 years since the goal, so they are looking to throw a good party. I think that by that date, the statue would already be there. That match was crazy.”