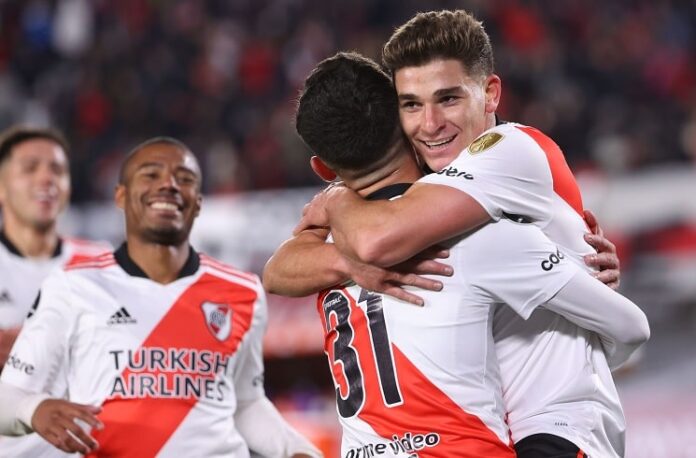 Julián Álvarez scored an impressive six goals for River Plate in their 8-1 win vs. Alianza Lima.

Álvarez made history as he became only the second player ever to score six goals in a Copa Libertadores match. The last player to score six was Juan Carlos Sanchez back in 1985 for Club Blooming.

The Argentine also became the first ever River Plate player to score six goals in one match. He would make it 1-0 with a pass from Santiago Simón and a pass into the goal to give River the 1-0 lead.

River’s second was another assist by Simón with a cross into the penalty area and a diving Alvarez got his foot on the ball and scored. But the third goal got the entire stadium erupting.

He would receive the ball outside of the penalty area and he would place the ball into the bottom corner of the goal to give River the 3-0 lead. At 3-0, he would pressure the goalkeeper, steal the ball from him and score.

And with only 57 minutes played, the 22 year old would chip the ball into the goal. His last goal of the match was a dribble into the penalty area and a goal with his left foot.

All 6 goals by Julián Álvarez for River Plate! Pep Guardiola and Manchester City have got a real star! pic.twitter.com/hafxbeVg6b